Posted by edlersin haiti at 11:16 No comments:

Big week and catch up

So this week has been busy and interesting.  Bill was back to being a student this week with his module on research methods every afternoon from 1-5pm aswell as teaching Monday, Thursday and Friday. he was scheduled to preach in chapel on Friday but needless to say he swapped with someone.  Bill is glad this week is over and he can get back to being a teacher, although he does have homework to do.

Yesterday was day 11 of someone in our house being sick with vomiting and/or diarrhoea. Sam started last Wednesday, Joel followed a couple of days later then Jacob a couple of days after that.  This week they are all on round 2 of what seems like the same virus.  Bill was also unwell Monday and Friday night.  Seemingly I am the only one in my house who managed to avoid anything even
Altidor, my PT tech was throwing up on Friday morning.  After that Bill began calling me typhoid Mary!  We would appreciate your prayers for everyone to get better and stay better and thankfully today they were heading in that direction.

Things are busy in the clinic and Altidor and I barely even get a break for lunch we have so many patients.  On Friday I had a patient who was in Port de Paix last weekend when the earthquake hit.  He had a stroke on Friday and was in the hospital over the weekend.  The hospital was full and once they felt the ground move, all the families ran outside and left all the sick people lying in bed!Thankfully the hospital was not damaged but my patients family told me stories of people who lost their homes, who are sleeping in the street and many who were injured.  They came to Vaudrieul to visit friends and are heading back to Port du paix next week.


Again and again we see patients who just should not be dealing with the pain and disability with comes from not having a good health care system.  One lady in particular stands out from this week, Altidor passes her on her way to work everyday and told her to come and see us.  She is 44 and has been unable to walk or stand for at least the past year and a half.  Getting a history in Haiti is very difficult so the story of how she got to where she is is a bit sketchy but she has been to many different doctors, had X rays and even a MRI scan and from every doctor all she has been told is there is nothing wrong with her.  She is extremely weak and has some neurological symptoms in her legs, Altidor and I have no idea of a diagnosis but we are going to try to treat her a best as we can.  She is being looked after by her three children, aged 22, 15 and 12.  I am always sharing with Altidor that having a disability in any country is difficult, but in Haiti where there is a lack of wheelchairs, poor roads and no footpaths, no hoists and no equipment etc life must be so so difficult.  Yet what we see again and again is resilience from our patients.

Its been raining every night for the past few weeks which, after months of drought, has been great for the farmers.  Unfortunately it has been awful for the road which is getting visibly  worse every day I drive it.  This is my commute to work... anything like yours?? 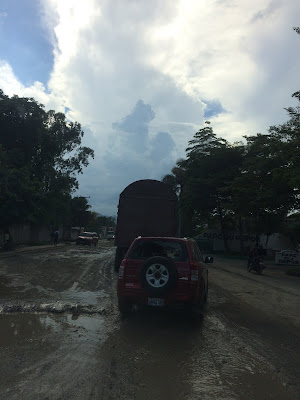 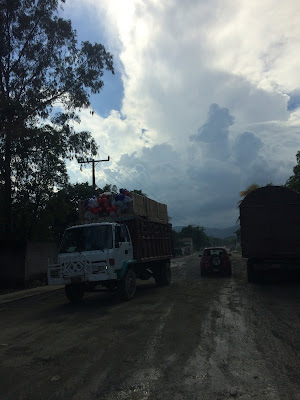 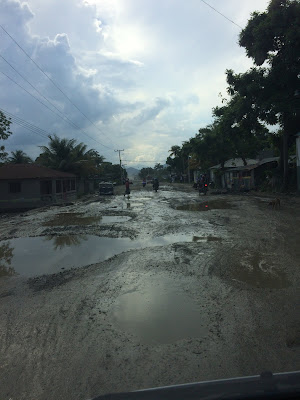 Posted by edlersin haiti at 17:32 No comments:

Is Jesus worth it?

As I mentioned in the last post transitioning back to Haiti has not been as easy as I thought it would be.  I've been getting annoyed easily and begin thinking things like if we weren't in Haiti...the boys would be able to see their cousins and grandparents ...Sam wouldn't be so exhausted and have so many melt downs...my neck and back wouldn't be half a sore because I wouldn't be driving on a bumpy road every day..

Usually when God wants to speak to me he says the same thing a few times and I know he is teaching me something new.

Last Friday night we watched a film with our neighbours called the insanity of God...boy was it challenging.  It told the story of a couple who moved to serve God in Africa.  Then later in their ministry they were thinking of ways they could support the persecuted church and they went to many different countries, interviewing Christians and asking the question is Jesus worth it? 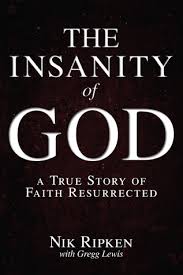 I'd love to share one particular story with you but maybe you should just read the book or watch the movie.  Anyway the couple tell stories of Christians they met from different countries who had been thrown in prison, beaten, tortured and had many other awful things done to them simply because they follow Jesus.  Many of these people have been through years of intense physical, psychological and spiritual suffering and yet they all agreed yes Jesus was worth it.

That puts living in Haiti into perspective.

Just two days later on Sunday evening Bill and I were listening to a sermon by David Platt.  We have been working through his series on 1 Corinthians and last Sunday evening brought us to chapter 9,  the sermon was entitled the cross and christian mission. (you can listen to it here).  David Platt is very passionate about mission and his sermon hit home. One of the questions he asked was, do we as Christians want to get to the end of our lives, look back and realise we completely missed our purpose.  Were we too wrapped up in church, in family life, in work etc, not that there is anything wrong with those things, but were we too engrossed in them to do what God has asked us to do.  And what that is is to go into all the world, preach the gospel and make disciples.  He was not saying we all need to pack our bags and move overseas but that each of us needs to be involved in the great commission.  For us, at this time this is why we are in Haiti.  So on those days when I really would prefer to be at home or when the boys ask if they can go to Bangor to see their cousin Jack because they miss him , its in those moments I need to ask myself is Jesus worth it?

And the answer...of course he is. If Jesus gave up his life for me then what can I give him but my life.

On a completely different note, this weekend we experienced two earthquakes.  A 5.9 on Saturday evening around 8pm and the next one, 5.2 on Sunday around 4pm.  The epicentre was about 75miles from us in the northwest of Haiti.  We are all safe and there is no damage where we are but it was definitely scary. As far as we have heard 11 people have died and others are injured in the Port de Paix area.

I, along with probably all of Haiti couldn't help but think of the 2010 earthquake in Port au Prince.  I couldn't believe how scary it felt for us and we were miles away from the epicentre, I can't even imagine what it would have been like in Port au Prince that day.  My mind is going back to the hundreds of people I worked with in 2010 and how they must be feeling right now.  The emotions and memories that are flooding back must be so strong and overwhelming.  Please remember the people of Haiti today and pray for those affected at the weekend and also for peace for those who were in Port in 2010.

Posted by edlersin haiti at 17:22 No comments: