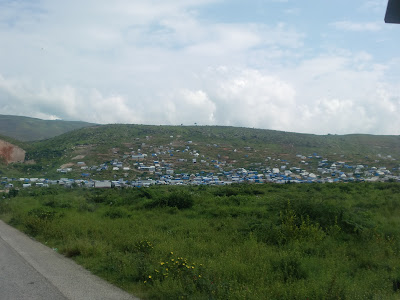 On Thursday morning the 14th October, three missionaries, four member of staff at the seminarary and eight of the students took the 8 hours journey down to Port au Prince. Thankfully they have been working on the road and the last four hours of the journey was all on smooth (mostly) paved roads. Coming into Port I sort of expected things to be different. It has been 10 months since the earthquake yet to be honest I did not see alot of change. There is a bit less rubble by the side of the road, a few buildings have been rebuilt and a few new houses have been built however in general there are still thousands upon thousand of people homeless and sleeping outside in tents, in makeshift homes which are made of a tarp yet have a tin door with a wee padlock. 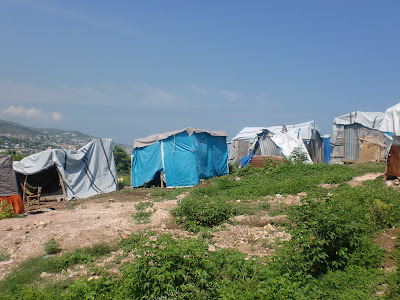 We drove right up to the top of the hill and arrived in Diquini to be greeted by Junior (our seminary studnet who has lived there for six months to lead the church) and several members of the church, one of the teenagers came over hugged me and said 'hi Julie'which amazed me, its been six months since I had been in Diquini. That evening we started with a service I think there were around 100 people there with a lot of people sitting outside the actual church 'building'. Matt preached the gospel clearly and simply and 12 people came forward at the end of the service to give their lives to God. 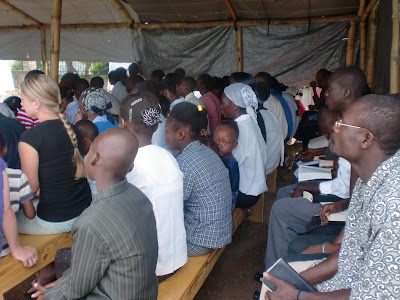 Over the next two days we spent the morning in the local community praying with people and sharing the gospel with other people who didn't yet know. I was out with one of the pastor's and it always amazes me how open haitian's are to talking about God. Like we just arrive at their house and everyone is sitting outside anyway and ask can we come and have a chat and they are like yes sure. We didn't have one person who didn't want to talk to us. One young guy we talked to was sitting with his friends and they were all very 'cool', long hair, ears pierced etc. We shared the gospel with the group and asked them what they thought, the young guy said he knew God was there after he saw what God did for him because he wasn't hurt in the earthquake. However I went on to explain its good to say thank you to God for those things, but what is even more important is that we are sinful and God did something even greater he sent Jesus to die for our sins and now we can have forgiveness and a relationship with him. The guy said he wanted to be saved but he had to wait until he was a better person, until he cut his hair and took out his earrings and until he had some 'nice' clothes for church. It was great to be able to tell him he can come to God just the way he is, he doesn't need to change first that it is God who will do the changing within him. Right there in front of his 'cool' friends he got down on his knees and prayed. He asked God to forgive him of his sins and said he wanted to Serve God with his life. 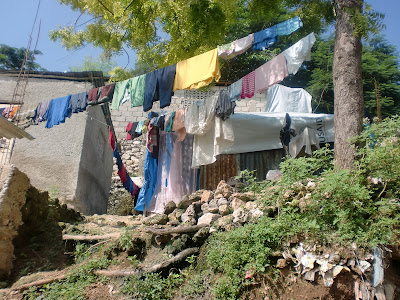 Later we went to the house of a lady called Marie. She had just become a christian recently and asked us to come into the house to pray with her, while we were there one of the pastors asked if she had anything in the house which she wanted to get rid off. He asked this because she was very involved in Voodoo before she became a christian. She went into the corner of the room and pulled out a bag of something, she explained she had been sick and had gone to a witch doctor for 'medicine' to help get her better. She didn't want anything to do with Satan anymore and therefore didn't want it in the house anymore, we agreed to take it and burn it. Then we prayer for her and over her house...a place and a life which has belonged to Satan had now been changed to a life for God. That night she got up in the service and explained to the church how God had changed her life. 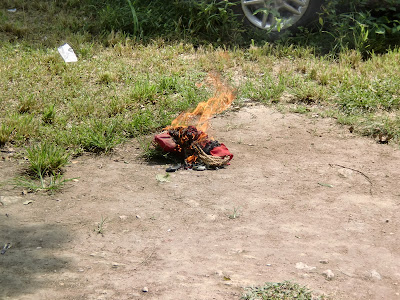 Burning the stuff from the witch doctor 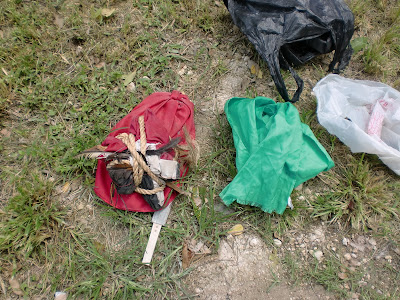 The other thing which Junior has been doing with help of some people from the states is building houses for some of the families. I can't exactley remember but I think they have built 12 houses. He bought the materials and the people built them themselves. Marie has one and they really are nice, they are made of blocks and cement and have an nice tin roof. 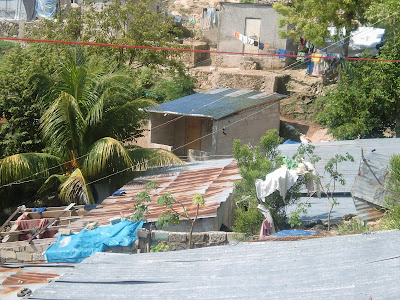 The house in the distance with the new tin roof is one of the new houses
We also ran a kids club on friday and saturday where we had singing, a memory verse, a story from the bible and some games. It was really great and the kids remembered the song we taught them in English from the time when we were there in April. 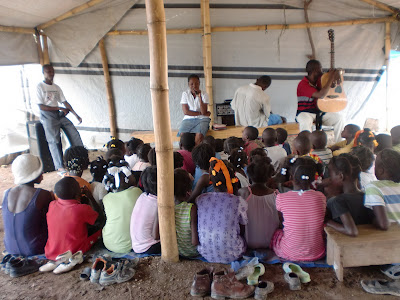 The first day of the kids club 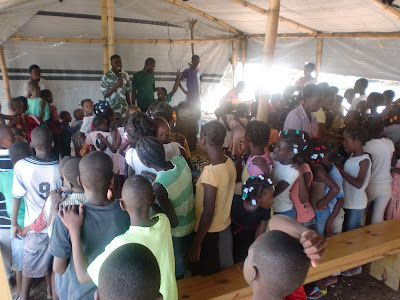 Word got out on the second day and we had over double the amount of kids.
Even though we had a great trip with many lives changed for God and the church encouraged, the situation is still desperate. There are so many people sleeping in tents still and from what I saw of the city it doesn't look much different to how it did in April when I was there. Every night we were there it rained and when it rains in Haiti it really rains heavy. The Saturday night there was a huge thunder and lightening storm, it was the loudest and longest thunder I have ever heard in my life. I was staying inside a building on a bed dry and safe and I was still scared. All I could think of was the thousands of people who were sleeping outside under the cover of a tarp or a tent....I can't imagine it would provide much protection from a storm like that. The thunder and lightening lasted for a good hour and it rained most of the night. When we got up the next day we heard that one of the families 'homes' on the hill had blown down in the storm. Please continue to pray for the people in Port, pray for Organisations who are building homes for people, pray for the government which actually will be changing this month as it is election month and pray that the money which has been pledged from so many other places will be sent and used wisely to help the people of this country. 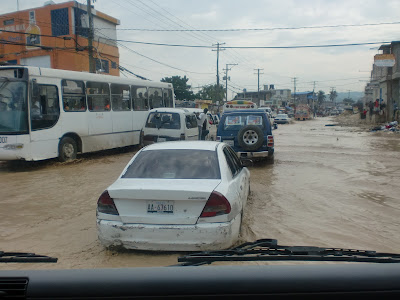