Things have been busy in the clinic and I thought I would share about a few patients and our long term plan for PT in Bethesda.

At the beginning of January I saw an older man in the clinic who was using 2 crutches to help him walk so told him to come in for physio.  His explained to me ' I had an accident just over 3 years ago and broke my hip.  I went to the big hospital in town where they put a metal rod in my femur, 6 weeks later they discovered the rod hadn't done anything so they took it out and sent me home and I have been walking with crutches ever since.' 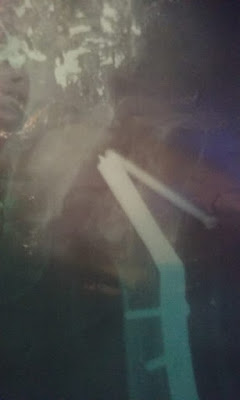 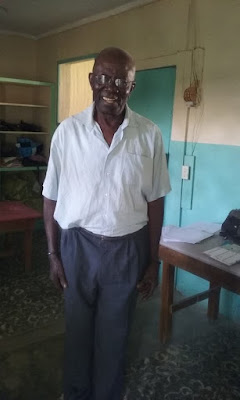 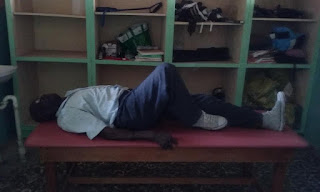 I gave him some basic strengthening exercises and told him to do them everyday.   I told him that I had no idea if the exercises were going to help because I didn't know what sort of shape his hip joint was in now but trying them won't do any harm. Fast forward one month and Denny came back for his check up extremely pleased with himself, he came walking in with no crutches at all!! This       was the first time in over 3 years he had been able to do           this!

I have been getting a few babies coming, who are all over 1 and are unable to hold their head, sit up or stand on their own.  I really enjoy working with babies but I really hate the first appointment.  The knowledge of special needs among people, including medical professionals is minimal.  Many parents come with their kids thinking that I will have a cure and be able to make their child better.  In these circumstances it is my job to explain that their child has permanent damage, that they will most likely never walk or lead an independent life.  That bit is hard. 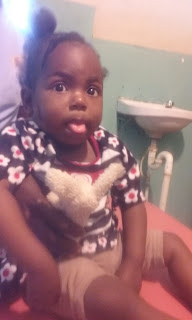 My last patient I saw where I had to do this was a 2 year old girl, unable to hold her head up. She is the youngest of 7 children and her mum is on her own as her 'husband' has other 'wives' and children.  When I first saw Evlinda a month ago she could not hold her head at all, she was completely unresponsive and unengaged in anything I was doing.  At that stage I actually thought that she had a problem with her eyes because she could not focus on anything. I gave her mum some exercises to do, give her some advice about changing position and showed her how she can help Evlinda in different ways.

When Evlinda came back for her first check up, I was shocked.  She was focusing on me, engaging in everything I was doing and smiling throughout the whole treatment session.  She had much better head control and had even started to roll over at home.  I asked her mum if she saw a big difference in her as I thought maybe she was just having a bad day the last time she was here.  Her mum responded ' yes, before I didn't know what to do with her so she I just left her but now I do, she is even starting to misbehave!'.  When they were leaving Evlinda even put her arms out to me to stay!

Here is my other little patient who comes on the same day and has pretty much the same story.  His mum is only 17 and still at school, he is 17 months, pretty unresponsive with very poor head control and unable to sit up independently.  Again I gave his mum advice and exercises and after just one month he was much more engaged, holding his head up, rolling over and learning to sit.  I love this picture of him! 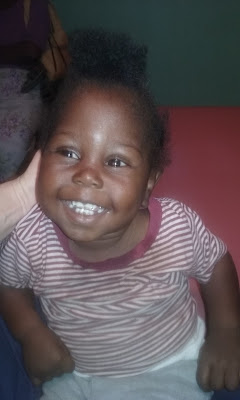 Five weeks ago I had a new patient who had suffered from a stroke just 3 days before, he was completely paralysed down his left side.  I always get a bit nervous treating a new stroke, I have no hoists and am using family members to transfer the patient to the bed.  I teach the family what to do at home and ask them to come once a week for treatment which is much less therapy than they should be getting.   Last Thursday during treatment Joseph stood on his own, moved his left hand and walked with assistance all for the first time,he (and I!!) was so pleased! 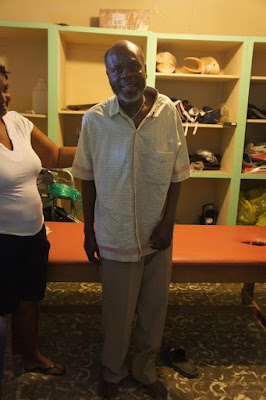 Our long term plan for Bethesda is to build a new purpose built space for PT,  the space I am in at the minute is very small and limiting especially with those stoke patients.  Once we have the new building we will employ a Haitian PT technician who can work alongside me while I am here who can then take over once I leave.  I would also love to start some group exercise classes for patients. which would include a time of education and give people some support.


If you would like to be involved in helping Bethesda treat more patients like Evlinda, Denny and Joseph you can donate to the new building through OMS.  Seeing half our readers are from the UK and half are from North America, I'll have to explain two different ways to give! Please bear with me......

In North America -  You can donate online through the OMS website here,  just add in 408213 as the project number.

In the UK -  You can send a cheque to the OMS UK office along with a note stating 'Physio project 408213' or you can donate by BACS please email me (julieedler@hotmail.co.uk) for the OMS bank details.