Light in the darkness

Today while I was at Bethesda, Ms Prudence came to see me and we were talking about the situation in Haiti, which is really all anyone can talk about right now.  While walking round the clinic this morning Ms Prudence pulled aside 9 children who had come to see the doctor about something else but looked like they were suffering from malnutrition, we have never had that many children in one day. It was a hard heavy morning.

But then she began to tell me a wonderful story of transformation about a patient of hers. With everyday bringing with it more stories of protests, road blocks, hunger and suffering it was so good to hear what God is doing at Bethesda. The patient actually happened to be at Bethesda today and told me her story.

'I started to get sick a few months ago and initially decided to go to a witch doctor.  I spent one month at the witch doctors house where he made me drink different teas and take herbal baths.  I continued to get sicker and sicker and got to the point where I was so weak I couldn't walk anymore and I had developed some big cysts on my neck which were weeping.  My family took me to my aunts house in a different village and there I met a pastor who told me to come to Bethesda and Ms Prudence would take care of me.

I came and my family carried me in to Ms Prudence's office.  She did some tests for me, I was very anemic and was diagnosed with TB.  Ms Prudence told me she could not treat me at Bethesda as I was too sick.  I need a blood transfusion and to be hospitalised.  But I did not want to go anywhere else.  We went home and came back again the next day.  Again Ms Prudence told me I was too sick, I needed to go to hospital.  She did not want me to travel back and forward to Bethesda especially as it took me almost an hour to get there and I was so sick I could not walk. She advised me to go to hospital.  I went home again as I really wanted to be treated at Bethesda.  The next time I returned with some more family and we begged Ms Prudence to treat me, my mum even told her that if I died it would be on her head. Ms Prudence saw that I would not go to any other hospital even though I needed more than Bethesda could provide.

I began my treatment for TB, Ms Prudence worked on the cysts on my neck and slowly I began to get better.  Even though I should have got a blood transfusion and did not get one I still got better.  Today I have all of my strength back, my neck is better, there are no more cysts and I feel completely better.  Today was my last appointment for TB and I no longer need to take the medicine.  I gave my life to God as I see how he saved my life.  I give all the glory to God for how he saved me. '


This is exactly why Bethesda exists : to treat the sick and to share the gospel.
We are praising God for how he is working through Bethesda. 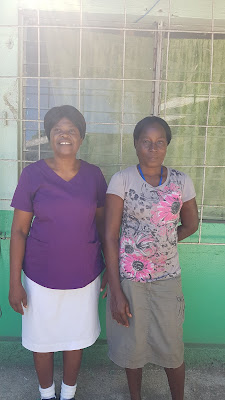