Four years ago today we left our home at 5.30 in the morning with Sam who was 2 and Joel, just a baby at 4 months old to move to Haiti. 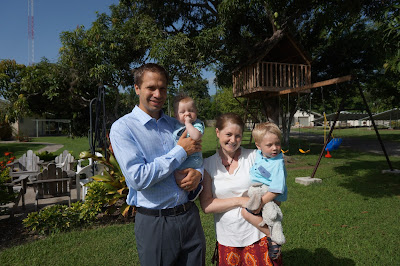 The past four years have been extremely challenging, unbelievably tiring and very stretching.

I could write about some of the challenges and things that have just been really hard about living in Haiti but over the past few weeks through reading other missionary stories, through His word and in particular a podcast I've been listening to the Lord has been changing my perspective.

I've decided to leave out the hard bits and just share with you some of my highlights from the past four years.

First is Yvelinda.  I have always wanted to work in paediatrics but with the way things have turned out I've never got the opportunity or the training I really need so I feel very out of my depth when I am treating any kids at bethesda (plug if you are a paeds PT or OT I would love you to come and visit one day and teach me, Altidor & Echebert everything you know!).  Yvelinda was one of my very first paediatric patients in January 2017 with cerebral palsy.  On her first appointment she was unable to hold her head up, she was unresponsive, her fists were clenched and her mum has been to a lot of clinics and each time was not given any appropriate treatment. I gave her mum some simple advice and told her to come back in a month.  Yvelinda has been coming ever since and its been lovely to watch her develop. 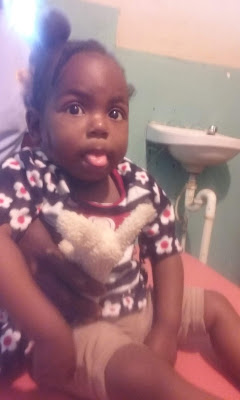 Today she can hold her head up, sit up on her own, she uses both hands to play, she is starting to say some words and she is working on standing up.  Two of the best moments happened during two different PT teams.  In Dec 2018 she received a wheelchair and she loved it! Actually she cried when we took her out of it!  Secondly was when we put her in the standing frame for the first time.  This photo says it all. 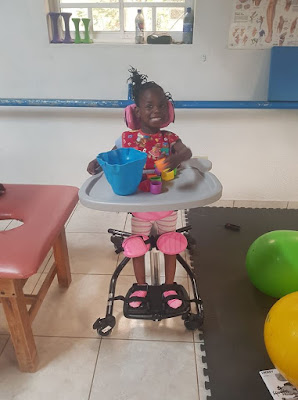 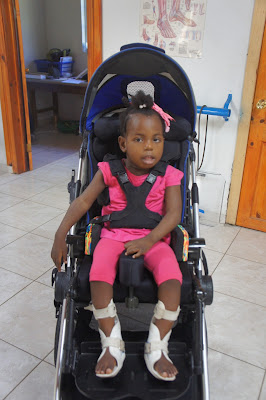 Second is Altidor and Echebert.  When I first started working I was on my own, two days a week in a very small not really good for therapy room. In January 2018 Altidor joined me in a new purpose built therapy room.  I had met her at some other physio meetings and what stood out to me about her was her commitment.  I recommended her to Dr Rodney not knowing that he knew her family and had already thought of asking her to join the team.  She worked for months voluntarily before we were able to pay her. 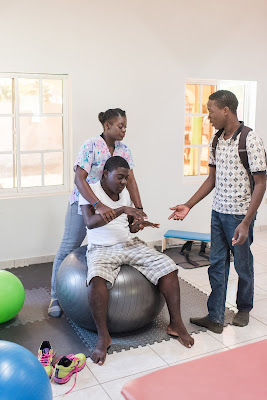 Then a year later we need another PT, we advertised and interviewed and Echebert joined our team.  I couldn't ask for better people.  They are both extremely dedicated to what they do, willing to learn, going above and beyond what is required of them and our patients love them. They are both studying psychology at the weekends so they can help their patients better and learning English so they can communicate and learn from our PT teams.  In October of last year bethesda was in a very poor financial position and Dr Rodney had been explaining to our staff the situation.  After the meeting Altidor and Echebert both told me they would be willing to work without any pay until bethesda was in a better financial position.  I am so thankful to God for sending Altidor and Echebert not only to work with me but as friends.  They help me learn so much about language particularly technical medical language, culture which goes so deep and show me a different side of  the people of Haiti.

In December the PT team presented them with an ipad to help with their learning, so they can keep in contact and take photos and videos of patients who they are having difficulties with.  To say they were shocked is an understatement! 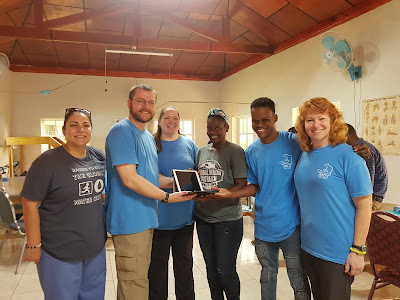 Third is the southwest baptist university.  Three years ago I had no idea that university even existed.  I had been communicating with one of their teachers Bev for about a year before I met her when she brought the first SBU team to Bethesda in January 2018.  After 18 months of working alone in a hot, dark room to having a team of physio's including two specialists with bags and bags of equipment in a brand new room was amazing.  Each morning they treated patients and I tried to learn as much as I could from Sarah the paediatric physio, then in the afternoons they ran education courses for 20 Haitian PTs.  I cried everyday I drove home that week, I was so overwhelmed at their commitment to what I was doing alone and it felt like they had come just for me. 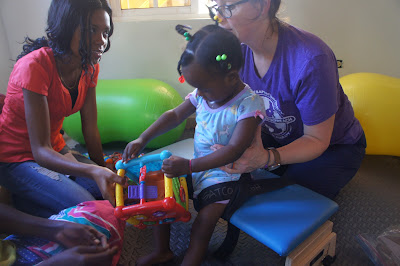 They then sent another team in December 2018 and December 2019, everytime they bring in all our equipment and supplies which we can't get in Haiti. I literally cannot put into words how helpful and encouraging these teams have been.  Their support to me, Altidor & Echebert has been wonderful not only when they are with us in Haiti but anytime we have questions we just send some photos and videos and have a team of people ready and willing to respond.  They also work alongside our staff, patients and translators.  On the teams last day one of our translators told them  that he had translated for many medical teams and had never  been treated so well and felt like this team treated him like family. That is a testimony to their humility and willingness to serve.  SBU have committed to sending PT teams at least once a year and it is them who are really training Altidor and Echebert. 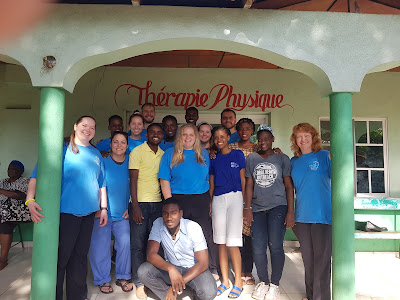 Fourth is the things our boys get to experience that so many kids will never get to do.  These boys have been on so many long haul flights it's ridiculous, they have flown in a 9 seater plane, they have met people from all over the world, they get to play outside barefoot everyday, they get to swim at a Caribbean beach, they get to go on a wooden boat, they get to see and experience a different culture, they get to travel and best of all they get to see what is really important in life and what really counts and that is being obedient to God and going where he asks you to go.  There are many times when they miss their cousins or want to go back to Bangor but they know God has asked us to live in Haiti right now so that's where we are. 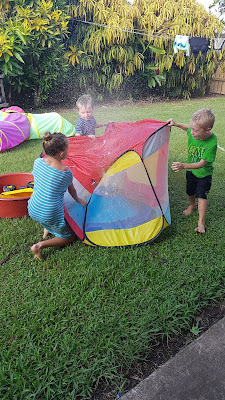 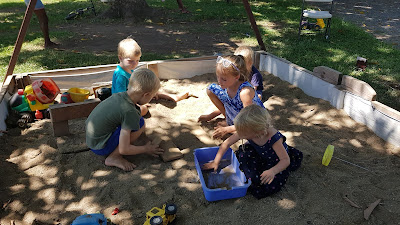 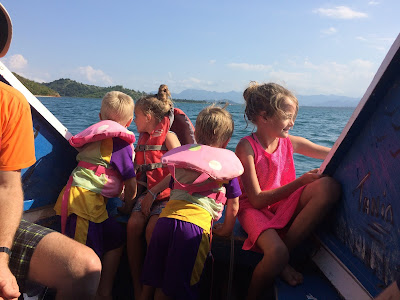 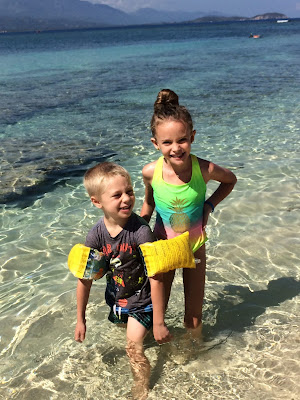 I could keep going and talk about a  mobile clinic to Roque, giving Yverose a job, watching a stroke patient move her hand for the first time in years, seeing the malnourished twins now thrive and doing home visits but this post is already too long! 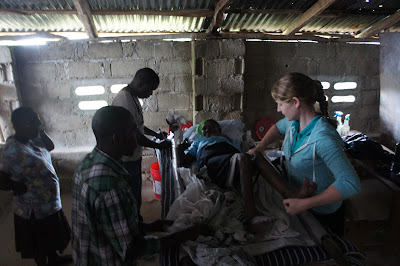 Despite all the challenges, which aren't really challenges compared to many other missionary experiences, our decision to be in Haiti for right now (or when we are able to return I should say!) is about being obedient to what we believe God has asked us to do. And as a result of that obedience this is just a little glimpse of what we get to be involved in and how we get to see God work first hand in our lives and in other lives and we would not change it.  Everyday in Haiti has its challenges and its a struggle but I love being part of something that is changing people's lives.


That is a privilege. 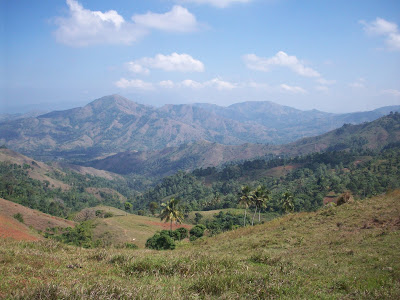 The steadfast love of the Lord never ceases
his mercies never come to an end;
they are new every morning,
great is your faithfulness.