Have you ever had a moment where things just come together and you think that's exactly what I have been working for?

This happened to me on Tuesday, during a zoom call!  I know were are all feeling zoomed out and by now we all know that using zoom is just not and never will be the same as actually being there in person but for me this was a great moment.

Let me give you some background, when I went to Haiti in 2016 Dr Rodney and I talked about my purpose in being there and what our vision was for the future of physio at Bethesda. Dr Rodney made it very clear that his dream was to have a completely Haitian run physio department because 'every time you leave there is no physio.' I firmly believe in the theology of missionaries working themselves out of a job by training up nationals to take over their work.  So we were both on the same page. 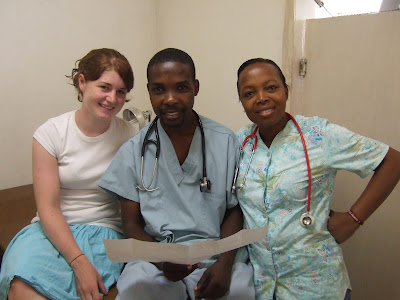 And this is what I have been working towards for the last 5 years. I started in a pretty old building and in 2018 we received our first team from the south west Baptist university just two days after the new building was completed.  The same month Altidor joined me as our first Haitian PT, you can read more about that here. 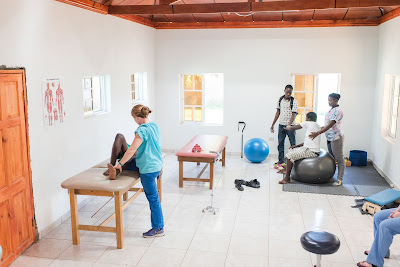 That December SBU sent another team bringing along more supplies including paediatric wheelchairs.  One of the things I love about these teams is the expertise they bring.  Altidor and I just spend the week learning as much as we can. We continued to have more patients and in April 2019 Echebert joined the team.  I could not ask for two better people.

Altidor and Ecehbert are eager to learn, they are kind, compassionate and really work as hard as they can to help their own people. 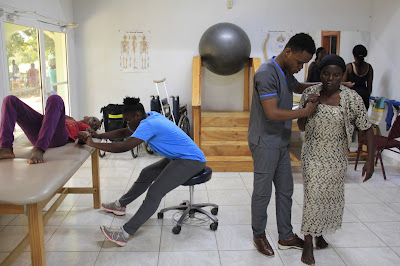 With the three of us we try to focus on different areas.  Altidor treats orthopaedics, Echebert treats strokes and I treat paediatrics.  We help each other out when needed and if they have a question they come and ask me.  If I don't know the answer we whatsapp our friends at SBU where we have access to university lecturers who are experts in their field. We can send photos and videos and even have video calls!

In December 2019 SBU visited again, this time bringing two teams back to back.  We added on a mobile clinic and home visits.  I took a step back and let Altidor do a lot of the leading.  At the end of the trip the team presented the PT department with an ipad to give Altidor and Echebert access to the internet for continuing education. 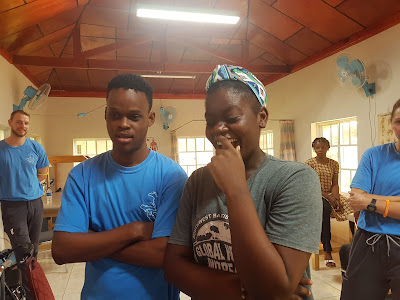 I love their reaction! Echebert was speechless! 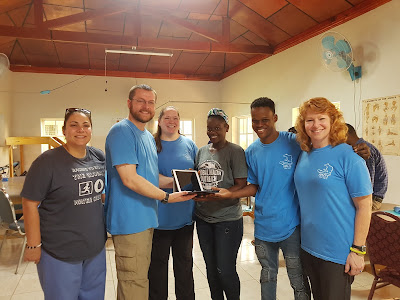 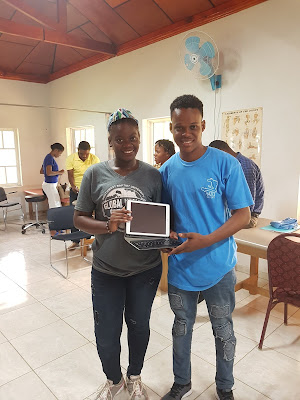 Again our patient numbers increased throughout 2019.  Then as we know in March covid hit and I had to leave.  I have been talking with Altidor & Echebert 2-3 times a month and Bev from SBU has been joining me on a lot of those calls.  We discuss patients and treatment.

That brings me to this week....why was this call so good.

One area we really feel we need to improve on is paediatrics. I learn as much as I can from any paediatric physios who come but we really want to do better.

So when Altidor told us about a patient she was treating, a baby with cerebral palsy who they needed some help with Bev suggested we get Sarah - the paediatric physio and lecturer at SBU to join the call.

We sent as much info as we could to Sarah beforehand including a history and videos and photos using whatsapp.

Last Tuesday we met, Altidor, Echebert, myself, Bev, Sarah and Alison, another PT who has been on all 3 SBU teams.  Sarah talked through some theory and treatment options but here is what made the call so great. 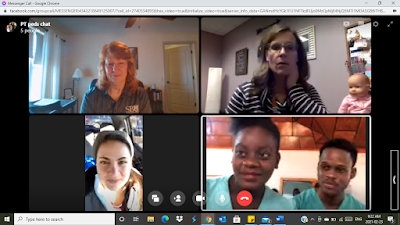 I know were all used to zoom but physios the US, Northern Ireland and Haiti
consulting about a patient....it was brilliant!

Altidor was already doing all the right things.

She hardly ever works with paeds as I normally do it.

The baby was born two months early in November 2019 and came to Bethesda in July very far behind in his development and unable to hold his head up.  He has been coming to PT regularly since then and now he is holding his head up, rolling over and sitting up independently.  Research has shown us that a child with cerebal palsy who sits independently before the age of 2 has a much higher chance of walking. 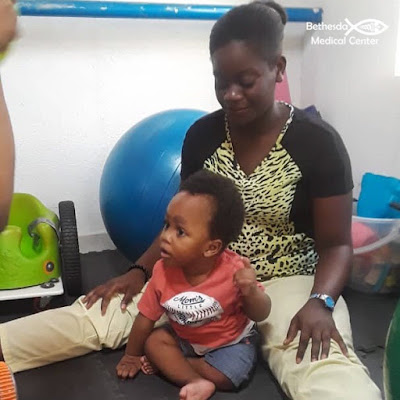 That means having a PT who can treat a child with CP could literally change the life of a child and their family.

For me, it was the moment it all came together,  this is what I have been working for the past 4 years.

To have a high quality, Haitian run PT department.  Except what has happened is even better.  Not only do we have a Haitian run department but we have a full support system in place.

The Lord has been so good and the whole thing has really turned out much better than I could have ever asked or imagined. 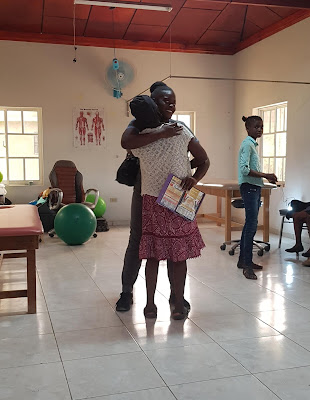 You may be asking what am I going to do when we return to Haiti.  My role at Bethesda has really changed over the past two years.  I now spend most of my time, updating the Bethesda facebook page, getting testimonies to share, writing thank you letters to supporters, making videos, fundraising and more recently working with a website developer on a new website (which will be ready next week!)
I have also done a couple of paediatric physio courses and am looking forward to teaching Alitdor and Echebert all that I have learnt!
at February 27, 2021