We were just talking last night about how these past couple of years in Haiti have been so difficult, from property issues, to political instability, to fuel shortages and rising prices to name but a few.  Some of the things which have happened I don't even think about anymore, just sort of blocked them out and its only when we start talking I realise how hard things have been.  It would be so easy to focus on all the difficulties and get stuck and give up hope.  But now I have some good news about Bethesda and how were moving forward.

Just over 6 weeks ago Bethesda made a down payment on a piece of property! The land is about 3 miles from our current location, right on the main road and is much bigger than what we have now.  We have paid approx 40% of the total cost of the property and have until May to pay the rest.  However we are praying that we will be able to pay of the remainder of the property by the end of the year.

We have a great team working on property including two architects who are working on building plans and EMI (engineering missions international). We are so thankful for these people and how God has provided them to join our team.

We have two fundraising teams going, one in the US and one in Canada.  Somehow I have managed to be on both of them! We are planning events, Christmas mailings, trips for Dr Rodney and lots more on social media.  We do need some more personnel on these teams if your interested in getting involved please email me (julieedler@hotmail.co.uk). Or if you could hold an event for us to raise awareness and support for Bethesda and the project to move please get in touch.  We will give you all the information you need to hold an event.

We are sending out monthly prayer updates, this is such a big project and needs to happen in a very short time period that we want to make sure the whole project is covered in prayer.  If you would like to be added to the monthly prayer updates, again please send me your email address.  Once a month we will be having a special day of prayer and will be asking people to sign up for 30 minute intervals so we can make sure the whole day is dedicated to praying for the project to build a new bethesda. This first day will be on 18th December.  Keep checking our facebook page for details of how to sign up. https://web.facebook.com/BethesdaMedicalCenterHaiti/

Finally we completed our first video, explaining the work of Bethesda and our plans moving forward.

So were moving forward and its all good.

I am very aware that most of what I have shared recently is heavy, not very encouraging and hard to read (that's not just because of my lack of writing skills!).  But I am afraid it's just the way things are right now.  We see glimpses of God working and we know he is but we are also trusting in him for the future of Haiti.

Thankfully the political situation where we are seems to be improving, there are many more cars on the roads and more people out and about. Just last week I drove past our local petrol station full of cars ready to be filled up.  It’s the first time I have seen fuel there since the beginning of September although I do believe they have had it once before now.  I have heard of a few schools opening last  week and talks of others thinking about opening soon.  We hear less and less talk of protests in Cap Haitian, so either they are not happening or everyone I talk to is fed up talking about that. 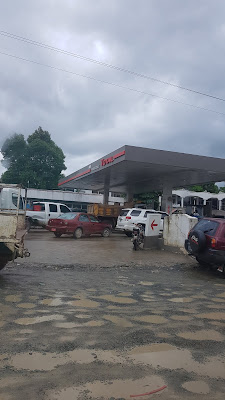 It feels like things are returning to a sense of normality.  Unfortunately, normal is just not that great.  The knock off effect of weeks of political instability has increased the price of food by a lot.  I think I read last week the inflation rate is more than 20%.  This means the little money people did have before is now buying less food.  Leaving less money for things like transport, clothes and medical care.  Just the other day I had a patient in the clinic who told me that she probably couldn’t come next week because she didn’t have any money.  Its 100 gourdes to come for physio.  That is just under $1 or 80p.

We do have a fund for people that can’t pay called the indigent care fund.  It's one of the things which makes us different from other clinics, we will not turn anyone away.  Ms Ketlye, our nurse who runs the high blood pressure clinic noticed the numbers were low in her clinic and she became concerned.  If a patient's blood pressure is not controlled they are at huge risk of a heart attack or stroke.  So she phoned the patients to ask why they had missed their appointments.  The same answer came up over and over again….no money, no money, no money.  Its costs 700 gourdes for this clinic…. £5.50 or $7.  Knowing our vision, Ms Ketlye told them to come anyway and that we would still treat them.  We now have over 60 of these patients in our indigent care program, where we treat them regardless if they have any money or not. 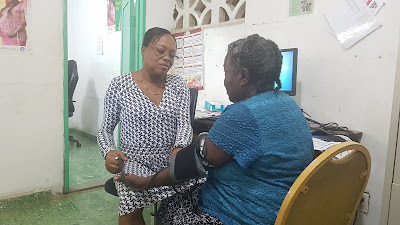 I debated whether or not to share what I am going to share next...but I decided I will.  I thinks its important to understand the real state of the healthcare system in Haiti.

A few weeks ago now, on a Monday morning, Ms Ketlye called me in on a patient.  A one day old baby girl, born at home with omphalocele.  If you don't know what that is, it is when a baby is born with some of their organs on the outside of their body.  These organs are covered with a thin, transparent sac.  Ms Ketlye called me in because maybe I knew somebody, somewhere, who knew what to do.

I am part of a medical aid facebook group so I wrote on there to see where we could send this little baby. Knowing we could not treat her at Bethesda we sent her straight to what is well known to be the best hospital here in the North.

With the help of people on the fb group, by Tuesday evening I was able to arrange for the baby to be flown to Port au Prince, where an ambulance could pick her up and take her to a hospital for the life saving surgery she needed.

Ms Prudence phoned the family and they were at Bethesda first thing on Wednesday morning ready to go.  I was just waiting to hear back from someone as to what time they should be at the airport.  But the little baby was very sick, dehydrated and her little belly already infected.

While we were waiting to find out what time to go to the airport, the little girl died in our clinic and there was nothing we could do about it.


It was heart breaking to say the least.  An injustice. A sin. A tragedy.

There are so many things wrong with this story I don't even know where to start.  A simple ultrasound at 20 weeks would have picked up the problem. Then the mum could have been prepared, maybe even traveled to Port au Prince before the baby was born. I don't know, anything would have been better than what actually happened.

Can you imagine, giving birth to your first baby at home and not knowing there was anything wrong? Can you imagine the shock of seeing some of her organs on the outside of her body?  Then going to the best hospital in the north of Haiti to be sent home and told there is nothing they can do?

The staff at this hospital didn't even ask for the baby to stay so they could monitor her, they didn't even put a dressing on the omphalocle to prevent infection!  And this is is the best hospital in the area!!

The other tragedy is this family were told to go for an ultrasound but they didn't go.  I don't know if it was a lack of money or education which made them not go.  But I am sure that both those things are big issues here.

I talked to a relative of the family the other day to see how the mum was doing.  She's there, I was told, but now everyone is saying she has some sort of evil spirit which made her baby ill and die. So now she is being told this was her fault. Can you imagine how that feels?

The only consolation I can get from this situation is the baby is now in heaven completely healed....knowing a life much greater than anything she would have experienced on this earth.

I was upset, then it got me thinking.  We are in the middle of planning to build a brand new clinic.  A chance to bring our facilitates into the 21st century and an opportunity to do things really well.  We don't just want to replicate what we have, we want to do it better.  If we do this properly and do it well Bethesda Medical Center has the potential to be the best clinic in the North of Haiti.

And yes, we won't be able to provide pediatric life saving surgery but we could provide high quality antenatal care.  We could provide education for pregnant moms.  The thing is the culture around antenatal and indeed post-natal care needs to change and big change comes with education and trust. Can we build up enough trust in our patients to change years and years of beliefs?  Can we speak the gospel to people and teach them the truth so when a baby is born with a genetic problem our patients don't blame something satanic?

What if in ten or twenty years time we do have the facilities, staff, equipment and personnel to provide life saving treatment or surgery?  Is this too big a vision? I don't know.  What I do know and hear stories of is that what Haiti has now is not good enough.  Not one more little baby deserves to die because Haiti doesn't have good healthcare or because their family do not have enough money to go to the doctor.

So please pray with us that God will provide all we need to build a new Bethesda.  Pray that God will send us the right personnel to help us with fundraising, with property and medical personnel to train our staff and improve our quality of care.