Each night we were down in Port we stayed up with the students talking and laughing (alot), practising creole/ english (some people here think I need to practice my english!!), learning more about each other's cultures and then telling our stories to each other. How we got to where we are today, how a group of people from 4 different countries are all together in an extremely poor area of Port-au-Prince, Haiti over easter weekend telling people about Jesus. 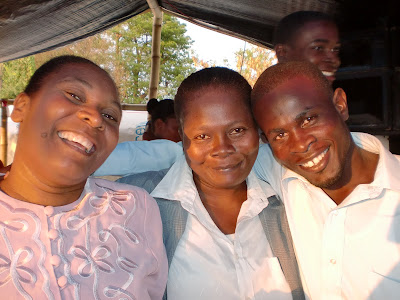 Nicole is in the middle
Here is Nicole's story:

I was born in Port, my mum was just 16 years old when I was born. My father already had a wife and 2 children, he has cheated his wife. After I was born, my mum looked after me for a while but then when I was about 9 months old, I got really sick, so my mum put me in a cardboard box and left me on the front step of my father's house. I have never seen her since then.

My grandmother was the first person to find me, except she did not know who I was because my father never told his family about me. She just left me in the box until my father got home that evening. When he looked in the box he said thats Nicole. Then he had to explain to his family who I was, his wife wanted to leave me where I was to die. But my grandmother said she has always prayed for a little girl so she would look after me.

My grandmother died when I was 4 and I had to live with my father and his wife, I was treated as a slave in my own home. When I was 12, I gave my life to God and he saved me, I began to pray and pray, I was always praying. I grew up, got married and had 5 children, 3 of them are my own and I adopted 2 who were abandoned. I was a teacher but I felt like God was calling me to do more, so I joined seminary in Port. I was in 3rd year when the earthquake struck.

on 12th January I was in my house with my children, my husband was at work. I felt the house shaking and then saw the walls move and ran outside, praying God would save me. By God's grace my family were not hurt. But we had to then sleep on the road, our house was destroyed. The first night (Tuesday) after the earthquake I left my children and went out to the street and began singing to the Lord, soon people began joining me and we sang praises that whole night. We slept in the street until sunday then a friend of mine gave us an opportunity to go to northern Haiti she knew someone there who would look after us. I went with my kids and my husband stayed behind in Port to try and build us a house.

When we arrived I felt God telling me to go and evangelise the area, I never been to this area but I obeyed God. All week I spoke to people about Jesus and many people came to know him. That friday I met a pastor (it was actually Pastor Exalus who is the pastor for our clinic) he invited me to his church on sunday, so I went. He asked me to share about Port-au-Prince and I also shared something from God's word. After he asked me how do I know the bible so well, I said because I was in seminary in Port-au-Prince. He then told me he heard Emmaus seminary were accepting students from Port for free, did I want to go. I said I would pray about it and I did.

That Tuesday while I was praying I felt God say to me, pack your bag you are going to seminary. So I phoned Pastor Exalus and he said no wait until I find someone who can take you, I said no God told me to go today so I went. When I arrived I spoke to Pastor Paul Vilmer, and he said we are starting class tomorrow you arrived on a good day!And that is how God has lead me to where I am today, I should have been dead, first as a baby then during the earthquake but God has saved me.

On our way down to Port I was asking Nicole if she would see her husband. She told me she didn't know, she has not spoken to him in 6 days and did not know where he was. That saturday she went to look for him, to ask if anyone had seen him, she came back that evening very discouraged, no-one had seen or heard from him. By sunday it was 9 days which she hadn't heard anything from him. Immediately after the church she got a phonecall from her husband saying he was fine. He had been in another place and did not have any charge on his phone. Of course her her firsts words after that were, 'Thank you God, praise the Lord' 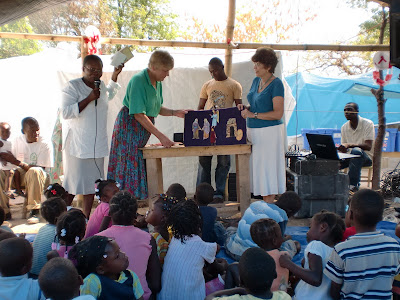 Nicole in action with the kids, she told the stories and she was brilliant.
I loved getting to know the students last weekend,we spent the weekend talking, laughing, praying and alot of singing....those guys can sing they were great!!!They all have such amazing stories and God has clearly guided them to where they are today.
at April 10, 2010