A lot of people have been asking me how are things in Haiti now, have things settled down a bit since the earthquake. And I guess they have since 12 January but for lots of people life is still a struggle. I am glad people are asking though because so often things are forgotten about, they are top stories on the news for a few weeks then its forgotten. Haiti will need help for probably years to come, it will take a long time to rebuild Haiti. 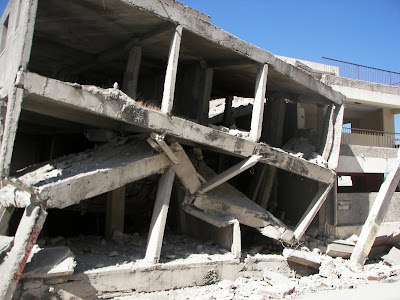 Here are some facts from a world vision report from Port-au-Prince. 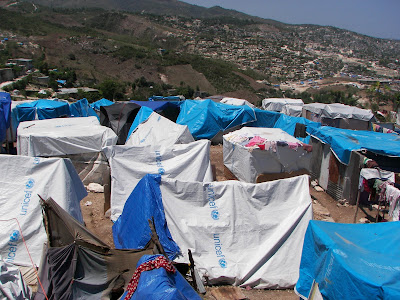 This is what world vision are working on right now
1. Shelter
2. Food
3. Water
4. Healthcare
5. Income
6. Education and a future for children

Right now there are 1.3million people in Port who are homeless and those who do have homes are living in tents, clean water is hard to come by, there is food avaiable to buy on the street but so so many people have lost their jobs and have no work there is no money to buy food. Sanitation is very poor, in Haiti pre earthquake sanitation was already poor this has just gotten worse. Meaning the risk of disease spreading is higher. Straight after the earthquake the government announced all healthcare was to be free for the next 3 months, thankfullythey have extended that for a furthur 3 months. School started back in Port officially on 5th April however many schools were not in the position to re open.
This is the reality in Port right now, true the inital devastation on the earthquake is not so evident but now the Haitian people have to try and get their lives back. Deal with living through the earthquake, with losing family & friends, their homes and everything they had and any injuries they have as a result of the earthquake. Now to try and find shelter, food, water, work and education for their children.
If you are interested in reading the world vision document here is the link.

As you know I have been working in Milot where all the patients were from Port, just last week they discharged another 50 patients back to Port. When I spoke to most people they wanted to go to back to Port because that is where they know and that is home for them but I can't help thinking how difficult it will be. Going from a hospital where they have been looked after for 3 months, where they have had good shelter, a bed, 3 meals a day and water when they need it to a tent in the middle of a tent city with no guarentee of where or when the next time they will eat will be.

Here are a few of my special friends who were discharged this week..... 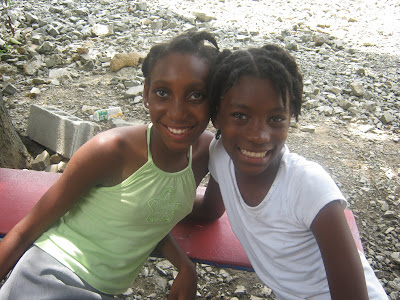 Edwina (on the left), she lost some of her family and was staying in Milot with her Auntie. When I first met her she was very withdrawn and depressed. She was in alot of pain from crush injuries on her legs and was not doing very much walking at all with her frame. Now she is much brighter and can walk independantly. 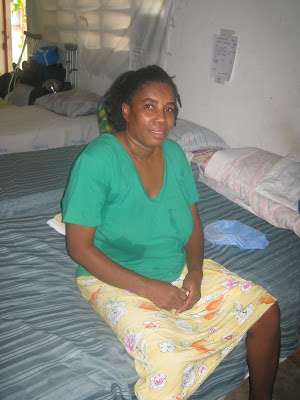 Ena was really very sick after the earthquake, she had a skull fracture, multiple fractures on her left foot and a left wrist fracture and a pelvic fracture. She was on the US comfort ship and was really very unwell, they weren't sure if she would be ok. She was transferred to Milot a few weeks later and has really improved. 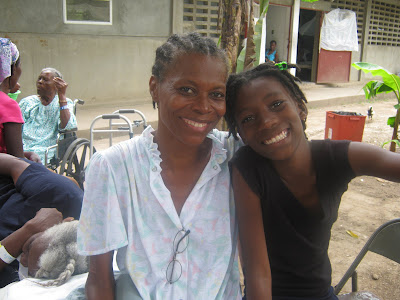 Bernadette and her Daughter. Bernadette lost one of her sons in the earthquake and her husband is still in Port. She fractured her elbow and had to get pins put in. However because of the initial lack of physio she ended up with a very very stiff left shoulder, elbow, wrist and hand after 8 weeks of not moving at all!!She has really improved. 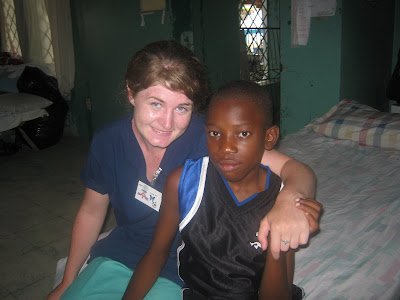 Pierre is normally much happier than this!!He has the best smile, Ive no idea why he wasn't smiling of why I have no photo's of him smiling!! He had a broken leg and was down in Milot with his mum. 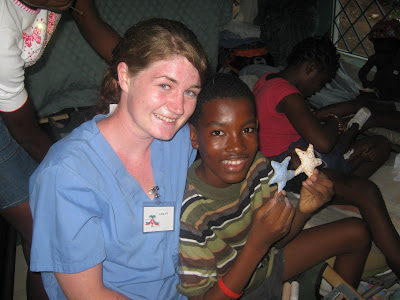 Paul is a wee pet. He fractured his tibia and fibula and has to have an external fixator on, then a cast now is walking with  just one crutch. He now wants to be an orthopaedic doctor when he grows up. He phoned me when he arrived back in Port and he is living in a tent with his mum&dad.
Please continue to pray for these people and for all those people who are living in Port. Continue to pray for Port au Prince and for Haiti, it seems to me it will take a miracle to change things....Thankfully we have a God who can do miracles and can change Haiti.
at May 04, 2010