There are a few things going on between our community and the clinic which we would value your prayers for. Anyway because of that I was really very discouraged at the beginning of this week but God gave me a really couple of special days this week reminding me why he has called me here and how he is working despite the difficulties.

We had a great team here from Canada these past two weeks and they were just willing to do anything we needed them to do. I was organising a mobile clinic for Saturday and was planning to count all the medicine on Friday because I didn't have any patients booked in, even with that over 10,000 tablets to count I didn't think I was ever going to get it done. I turned out to be fully booked and has patients right through until 2.30pm and thankfully the team came and counted all the medicine for me otherwise I definitley would have been up all night. As you know I am not the most organised of people and for some reason I always leave things until the last minute, so I am very thankful for the team. 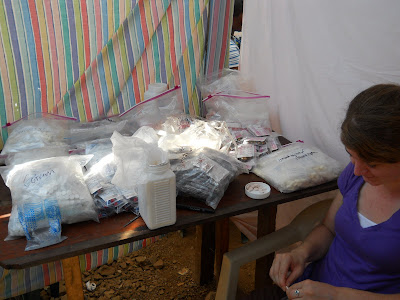 There was a lady on the team who felt God was calling her to sponser one of our seminary students but she felt strongly that it should be a woman. She asked if I knew anyone who needed help, we only have 2 female students and I am really good friends with one of them Nicole. So I arranged for Nicole to come over so they could meet each other, Nicole has a powerful testimoney of how God has worked in her life and called her into seminary. I did write part of it before here, to write her whole testimoney would take me forever I will just pick out a couple of bits for you or give you the shortened version..... 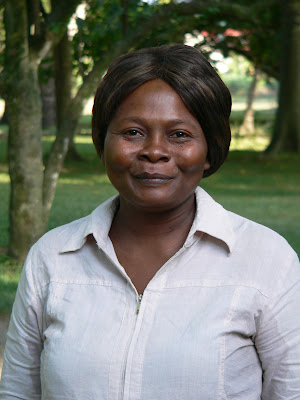 'My mum was 15 when I was born and when I was  9 months old she left me in a box close to my fathers house. My grandmother found me however she did not know my father had any children, later when my father came home he told her he was my father. My grandmother brought me up until I was 4 and then she died, after that I returned back to my father's house to live with his new wife and family. I had a difficult childhood, my stepmum was always jealous of me. I grew up got married had 3 children of my own and adopted 2 more. One night I had a dream, me along with all the leaders of my church were going to the ambassadors office to collect our visa's to go to the states. A man came down to collect the papers and took everyone's, when he got to me he said no you are not part of this group. I was surprised and asked him to go and talk to the ambassador. He went, returned and said the ambassador said You are not to leave, he has work for you here, go across the road and find Pastor John (this is not his actual name but to be honest I cannot remember the name of the pastor!!) tell him I said he has to take you to seminary and enroll you there. That was the end of the dream. The next day in church the leaders were having a meeting and one of the leaders stood up before us and said 'God is calling someone here who is it,' I didn't say anything, he asked again, again I didn't respond and the third time I replied it was me. Then for 6 months nothing happened, one day in the school I had in my house one of the kids brought one of their books to me and when I opened it the person who has signed the book was called pastor John. Immediately I asked the mum of the child if she knew this man, she said yes and I asked her to take me to him.
I went to see him and explained my dream, he said ok I see God has spoken to you however he has not spoken to me, give me your phone number. One week later the pastor phoned me and asked me to come to his house. He said God has spoken to me, come with me so I can enroll you in seminary. I was in my 3rd year on 12th January when the earthquake hit, I felt the earth shake but by the grace of God I was unharmed but my house fell down completely, I slept out in the road for a few days with my 5 children. When a friend of mine who lives in the north sent a car down to bring me back to where she lives. After a few days I was frustrated, I had nothing, no money, no food nothing I wanted to go back to Port au Prince. I had a dream with God telling me to stay here, the next day I went out into the area evangelising. The area has alot of witch doctors and alot of people serving Satan but i preached the word of God. The next day sunday I went to church, the pastor stood up and said we had someone evangelising in this area yesterday if that person is here can they stand up and tell us who they are. I stood up and explained to the church who I was. The pastor came to talk to me afterwards, later that day another pastor, Pastor Exalus (who is actually the chaplin in our clinic) phoned me. He asked about my story how I got here, he told me OMS have a seminary who is accepting studnets who were in seminary in Port for free if I wanted to go he would take me on Thursday so I agreed. The next day God woke me up at 4am and told me to go to seminary today,I packed me bag and called pastor Exalus and told him I need to go today. He said no I can take you on Thursday. I said no God told me to go today, he replied 'Ok if God told you to go, you should go,' I said ok where is the seminary. Saccenville he told me. I did not have any idea where Saccenville was, I got on the tap tap and asked people to let me know when we arrive in Saccenville. Pastor Exalus had told me to ask for Pastor Vilmer, thats what I did when I arrived. I told my story and he looked at me. He said if you had have come on thursday we wouldn't have accepted you, class starts for everyone tomorrow. He gave me a room and I started seminary the next day.
I love emmaus and when we left in June I told Ms Stacey I will be returning in September not having any idea where I would get the money from. (Our students all have sponsers who help with the tution fees however on top of that the students have to pay some at the start of the year themselves). I have been praying all summer and I need to pay the money by next Friday or else I cannot return. I had stared to get a little worried but I know God is faithful and he will provide for me. And I see today how he is providing for me.' 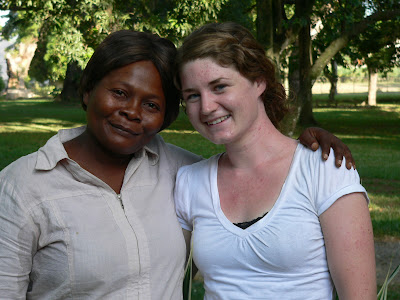 It was a very special afternoon as I was translating her testimoney I was getting goosebumps in the ways God has worked in her life. The other thing that I love is that all 3 of us where from different countries, one from Haiti, one from Northern Ireland and one from Canada and God has put all 3 of us in the same place at the same time to work together for his glory. I love that. We can never understand how God works, why Nicole had to live through 12th January 2010 and lose everything she has, yet I can see many ways he is using her here, where he has put her right now. She has been on a few mobile clinics with us and God is using her to bring people to himself.
It was a very special afternoon and that evening I went down to talk to Vedane and Dr Rodney (2 of my very close friends here) and I was telling them what happened, we spent the whole night just telling stories if how God has worked in our lives, I even didn't get home until 10pm (thats late for Haiti!!)
The second special say was Saturday but that will have to wait for another day........
at August 30, 2010