My closest friends in Haiti are a wee family which I am sure you have heard me talk about, Dr Rodney his wife Vedane and their 3 kids, Wood, Ollie and Alisha. Dr Rodney works in our clinic and they live on a wee house on the compound which is how I got so close to them. Dr Rodney has an amazing testimoney which I will share a little with you. 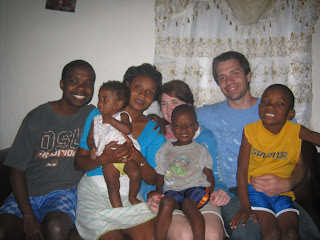 Dr Rodney grew up in Vaudrieul, and was very involved in his local church, so much so that people started to call him Pastor Rodney before he even left school!!When he was still at high schooll with his family struggling to pay the fee's for high school Rodney got a part time job translating at Bethesda medical clinic for visiting doctors and nurses. It was during this time he felt God calling him to be a doctor. However he came from a poor family and had no means of getting to university.

However Rodney with the strong faith that he has, and still has today, had saved up all his money each week from translating in the clinic and used it to get his passport and visa to go to the Dominican republic to talk to the people in the university there. The language is spanish in the dominican and the univeristy advised three months of language before staring university especially as the entrance exam is in spanish. Due to some circumstances Rodney couldn't attend language school he also couldn't attend the only day the exam was on. However by a miracle the university agreed to let Rodney sit the exam at a different time.


Remember at this point, Rodney has not been to language school or does he know one single word of spanish. He passed the exam and was accepted to study medicine in Univeristy in the Dominican Republic. During his first term he found another Haitian student who could translate the lectures from Spanish into Creole or French for him. However in saying this Dr Rodney's best marks throughout his 7 years at university were in his first year.

Rodney has many many stories of God's faithfulness and provision to him over his 7 years at university. There were many times when he had not a single penny left to eat, to wash his clothes, to pay for electricity and to pay his university fees. During those times he would go into his room and close the door and praise the Lord for how He had saved him and what he had done for him. Every single time over those 7 years God provided all that he needed, he would get a phone call from western union or somewhere else saying someone had transfered him money through. He told me he had just one pair of trousers and one pair of shoes through the whole 7 years and each day when he came home he washed his one pair of trousers and I even think he has that one pair of shoes!!! Just one example each month someone from the states sent Rodney $100, Dr still even today doesn't know who sent the money but they sent it faithfully every month. One Rodney's last month at university the person sent a message with the transfer saying their financial situation had changed and they were unable to send money anymore. What the person didn't know was that this was Rodney last month at uni and he would no longer need the money for rent. 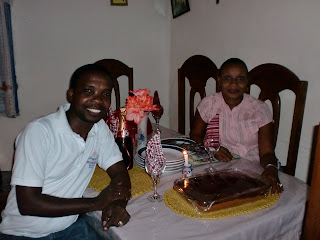 Dr Rodney and his wife left a 'nice' life in the DR to come back to Haiti.With no where to live and a baby they lived with Rodney's mum. Since then Dr Rodney has been working at Bethesda Medical Clinic at OMS. Rodney and Vedane now have three children, 2 boys of their own and one adopted (a baby which was abandon at the clinic).

Rodney believes God has called him back to work among his people, his heart is for his own Haitian people. One day he wants to open a hospital providing a high standard of quality healthcare and showing God's love to people who come. 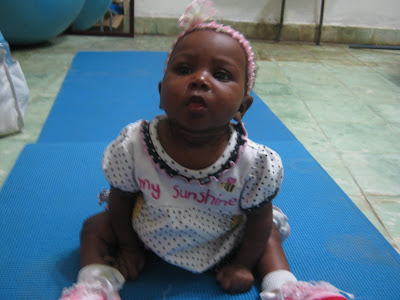 Right now Rodney is in Canada, his first time off the island of Haiti. He is working with a Canadian organisation called empower global (http://www.empowerglobal.org/). He is working on fundraising and speaking about their project. The project is three fold, firstly to open a medical clinic with affordable, quality healthcare. There are many clinics in and around Cap Haitian, however many of them are expensive, others are run by 'doctors' who have never been to medical school, others are just a money making scheme which do not help patients. Secondly to run mobile clinics out into areas where there is no doctor, where people die from simple illnesses, many of these places will also have never heard the gospel. For pictures of the vehicle to be used for mobile clinics click this link https://www.empowerglobal.org/initiative/124/. The vehicle is fully equipped to drive over Haiti's pot hole covered roads and even has oxygen in it ( It is difficult to find oxygen even in hospitals!!!). Thirdly to provide education on healthcare and prevent the same diseases occurring over and over again. This will happen by providing education to schools, educational institutions and communities. 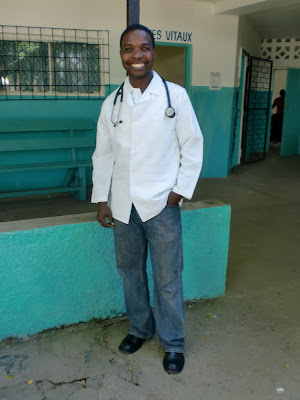 If you look back at Rodney's life you would never imagine he would be where he is today. It is exciting to see how God has led him and has used many different people along the way. Please pray for this stage of the project which is fundraising.