On Saturday our NI team along with a team from the clinic headed to Fev to do a mobile clinic.  The church at Fev has been there for just over a year and the pastor is a graduate of EBS. The church and surrounding field was set up for the clinic, basically we went wherever there was shade!! 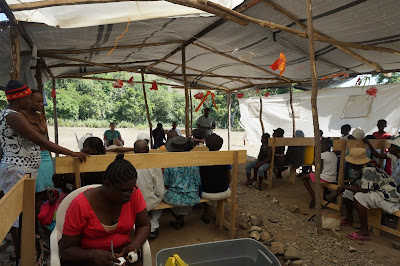 Pastor Walnique had been in Fev the day before giving out tickets for the clinic which made the morning very smooth.  We had various stations, dossier, BP, consultations, Lab, Pharmacy and evangelism / prayer station. 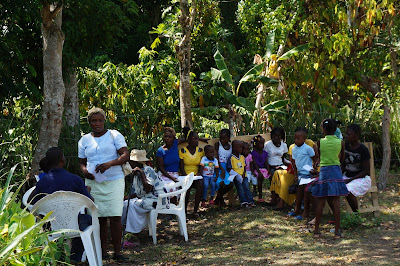 Were we able to see over 200 patients who probably wouldn't have otherwise been to see a doctor.  The day started with some education sessions.  We brought  a team of people from our HIV clinic, one of the nurses explained what HIV was, how you can get it, how it can be treated and how you can protect yourself.  At the end of her talk she asked how many people had never heard of HIV / AIDS,   I was shocked to see many of the patients put their hand up. Dr Rodney then did a session on cholera, he finished his session with the question ' How can you protect yourself against chlolera?'  again I was shocked to see only a few people knew the answer to this.  Fev is only a 15 minute drive from the seminary, its not way out in the country or way up in the mountains yet there was a huge lack in knowledge about medical care. 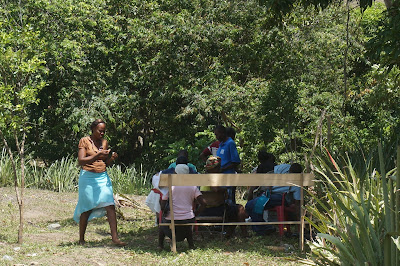 Bethany was taking blood pressure for older people and she thinks over 90 % of them had high blood pressure putting them at a huge risk for a stroke. The highest she found was in an old man whose BP was 290 / 220 (If you don't know the average is 120 / 80).  A lot of this is diet related as Haitian's cook with lots of oil and lots of salt.  Most of these people didn't know they had a problem with blood pressure.  We were only able to give them a month's supply of medication but they were advised to continue to attend a clinic to control their blood pressure, however this is difficult for many people as they simply cannot afford to go the doctor every month. 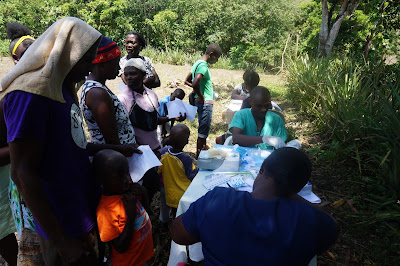 The lab team were carrying out HIV tests for whoever wanted them.  If anyone was found to have a positive result they would be told to come to our HIV clinic at Bethesda where they can get treatment for free. 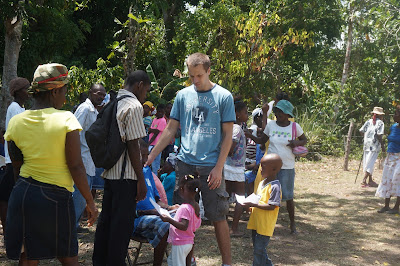 Our NI team worked alongside Pastor Walnique praying and sharing the gospel with the patients, we were able to pray with a lot of people who were already Christians.  We also got the opportunity to pray with 3 people who wanted to accept Jesus as their Saviour.  One of the ladies explained she understood the gospel and was ready to ask Jesus to forgive her, her husband then came over and said he would also like to become a christian.  We shared with another lady and at the end of the conversation she wanted to accept Jesus as her Saviour. 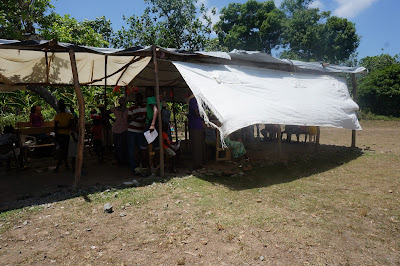 Lewis & I spoke with a man called Joseph, he lives with his girlfriend and they have nine children together. We were able to explain the gospel to him, he knew some things about the Bible but not a lot.  He told us he wants to be saved but he runs a lottery business and if he becomes a christian he cannot do that job anymore. If he has no work he doesn't know how he will provide for his family. We prayed with him and as we were praying  he was wiping the tears away from his eyes.

Another lady we met also said she would like to become a Christian but her husband is a witch doctor and if she did he would throw her out.  She would be alone with no one to provide for her.

A few people said they want to accept Jesus but they are not ready yet.  There is something in their lives which is stopping them.  All we could do was to explain that the bible says come to God the way you are, you don't need to sort your life out first. 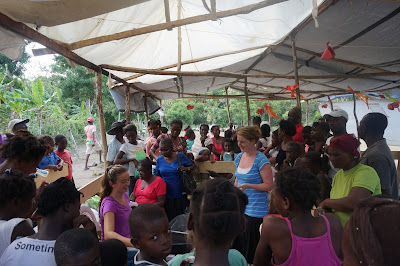 It was eye opening for us to see and hear the struggles people have.  It seems many people are open to talking about God, they want to become Christians but most of them feel they need to get themselves ready before they can come before God to ask for forgiveness. Thankfully this is not what the bible teaches.  If it was it would never happen, we would never be good enough to have a relationship with God.  It is only through the saving work of Jesus Christ on the cross that we can have our sins forgiven.  And the bible  tells us today is the day to come to God and to come the way we are.  We don't have to get ourselves ready.

Here in Haiti life is hard, in more ways than we will probably know.  But for those who put their trust in Jesus,  they can look forward to their hope, which is in heaven,  where there will be no more crying, no more death, no more suffering and no more pain.  That is the good news we were in Fev  to share with people.