Home and some other thoughts

We made it....its been a surreal few days! I want to share our journey with you and  share God's faithfulness and goodness. 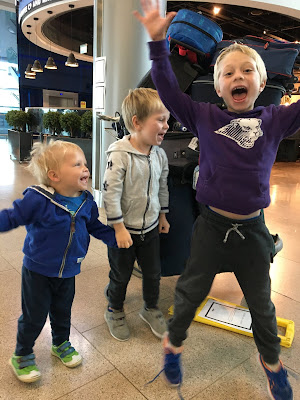 On our way home from the airport on Wednesday (which now feels like a week ago) the British embassy contacted us to say the French embassy were putting on a flight from Port au Prince to Paris on Friday morning for french and EU citizens.  Thankfully, in terms of travel the UK is still considered under the EU until the end of the year.

We needed to tell the lady at the Embassy if we wanted to be on the list by 4pm, this was at 2pm and we got home at 3pm and started trying to figure out how we were going to get to Port, and if Jacob, who is only a Canadian citizen, would be allowed on.  So we told her to put our names down and we would figure out the rest of the details.

We contacted MAF to see if they could fly us to Port au Prince and checked to make sure if we were still able to enter France.   We also phoned the French embassy and some other important people (I have no idea who, Bill did it) to make sure Jacob would definitely be able to travel with us.....we did not want a repeat of Wednesday.  Everyone we talked to said there would be no reason why Jacob could not travel with us.

Honestly by the time we got to bed I did not want to try again, I was so tired and just wanted to stay in our Haiti home where we have everything we need.

Anyway on Thursday morning we confirmed everything, did some shuffling of our bags as the weight allowance is only 15 kg, packed some more snacks and headed to the airport....again.

We even got to stop by Bethesda to say goodbye to Altidor, Echebert, Dr Rodney and some other staff.  MAF flew us from Cap to Port on a 9 seater plane which the boys thought was the best thing ever.  When we landed Joel shouted ' That was some great flying!' 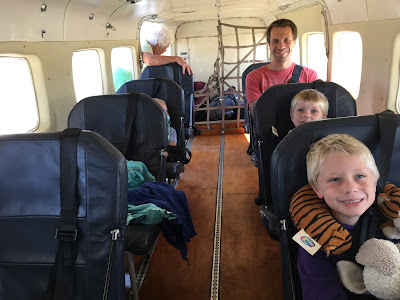 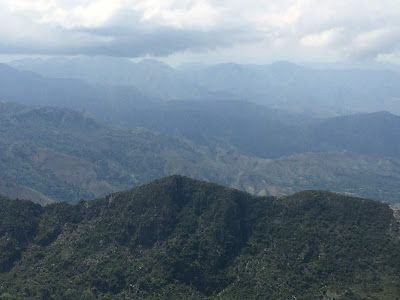 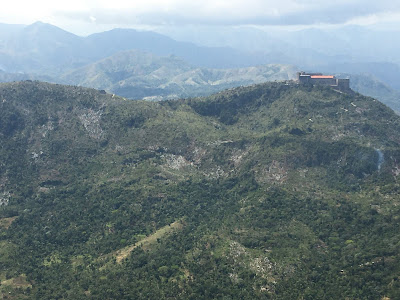 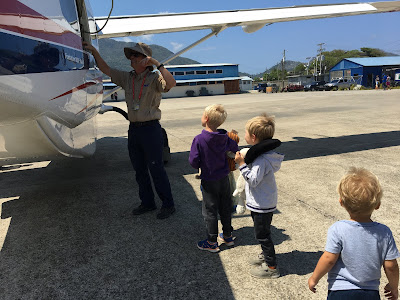 We stayed in a basic guesthouse right beside the airport and arrived at the airport at 7.  It felt very surreal, almost like we were in a movie, many people were wearing facemasks and gloves and there were a lot of policemen there.   The mood was very somber.  We had to queue up outside as they were checking everyone's names  off the list on the way in.  It was such a relief to get checked off and be able to enter the airport.  We had 5 suitcases and 5 pieces of carry on and a buggy so it was quite helpful it was a slow moving queue because there were no airport trolleys. So every time we moved forward, Bill had to do two runs to go and get our suitcases!After some more waiting we got checked in and were glad to get rid of our suitcases!Again it was relief that we were actually on the flight. 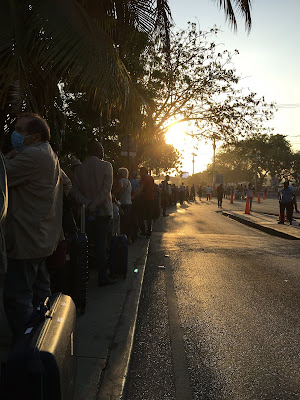 Around 11am we got on the plane, it was the biggest plane we have ever been on, must have been 400 people on board.  We sat and sat and sat on the runway after about an hour the captain told us someone had been feeling ill and they took them off the plane, then had to take almost all the luggage out to find their luggage.  We sat for another hour and finally the captain told us to sit down we were leaving....everyone cheered!It was an 8 hour flight and after sitting for 2 hours already we must have been on there for at least 10 hours.  Now the boys, especially Sam and Jacob usually cannot even sit still to eat their dinner every night but for some reason on a plane they will sit for hours! I am sure it is because of people praying.....maybe you should start praying for them to be calm at dinner time aswell!! 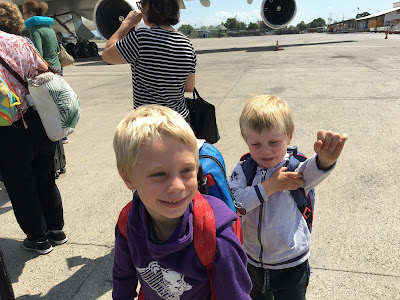 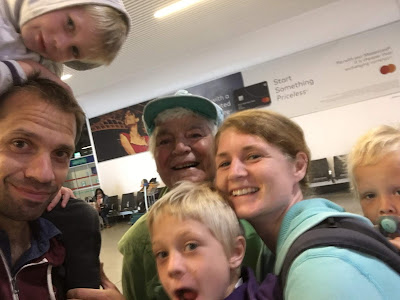 We left Pam in Paris for her to get her connection to England. 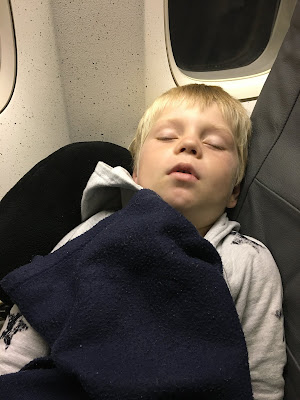 We landed in Paris about 3am Paris time, hung around a very empty, cold airport until our next flight to Dublin at 11.30am.  By this time the boys had only slept about 3 hours on the Paris flight and were still going strong,  I can't say Bill and I felt the same.  Our flight to Dublin had about 12 people on it! Sam is still convinced we didn't actually fly because he fell asleep the second he sat down and woke up after we landed.  The airport was empty, no problems at immigration even with Jacob's Canadian passport, got our stuff and were ready to go. 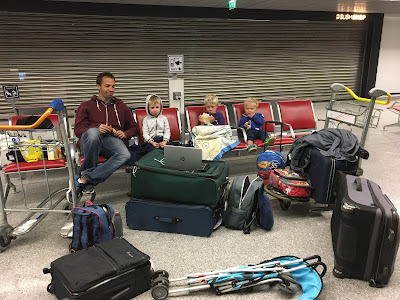 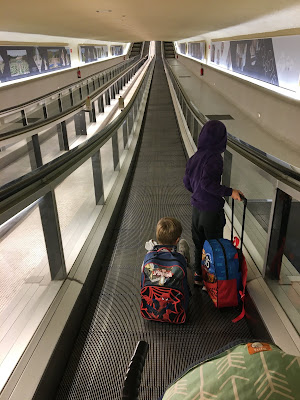 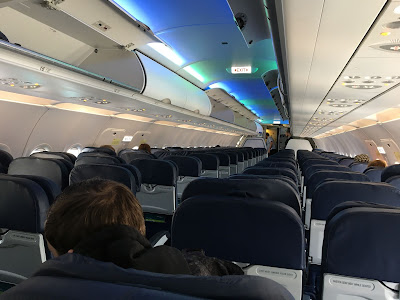 My sister Leah and brother in law, Robert drove down two cars to come and get us and we drove  home.  Thankfully I am still on my mums insurance from last summer.  We called by my mum and dads to talk out the car window so they could see we arrived and then did the same for my sister and her boys. 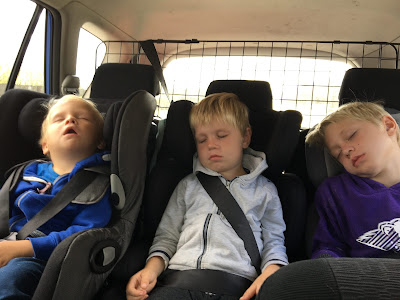 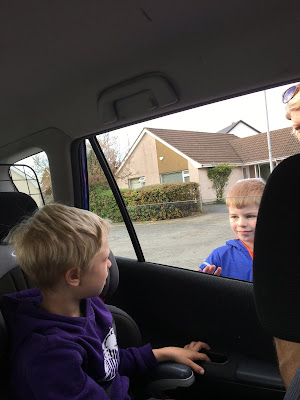 We are staying in the same house which we stayed in last summer so that has been really helpful to bring the boys somewhere they have been before.  I want to say a special thank you to my sisters who got the house ready for us.  It was so overwhelming to walk into a house full of food, toiletries (even toilet roll) toys, books, colouring stuff, clothes, shoes, socks, coats especially as we have to quarantine for the next two weeks and have no idea how long we are going to be here, we are assuming it is going to be months and the heat was on which you know is important for us!!


A huge thank you to anyone who sent clothes, food, books and anything else for us, the support we have had has been amazing and such a blessing.  The last few days have been a whirlwind and to walk into a house which has everything we need is really amazing, especially for me.  Everyone looks to mummy when they need a drink, something to eat, socks to wear, a book to read, a coat and shoes and a million other things so to be able to just give them what they need and want for this next two weeks especially, is such a big weight lifted off my shoulders.  So often I have to say we can't get that in Haiti, or we can't do that in Haiti or there is no where to buy that in Haiti and now on our first night home I can give Sam blueberries and raspberries in the middle of a pandemic when everyone is telling me its really hard to get fruit but someone (my sister I think) thought to get that for us. Thank you doesn't seem like enough. 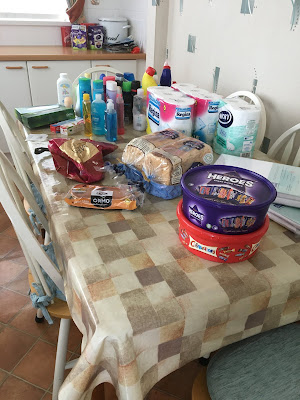 Bill jumped straight in the shower....it had been a few days! and I got everyone's airport clothes straight in the wash.  We unpacked our pjs and left everything else and ordered something for dinner which again I can never do in Haiti.  I am sure the food really wasn't that great but after eating mostly snacks since Wednesday (everything in the airports was closed!) having a hot dinner was amazing!!

We are so thankful to be home safely but our hearts are heavy for Haiti.  Its hard to leave especially in the middle of a crisis.  Its feels like you are abandoning your friends and like your health is more important than theirs. It is so hard to tell your friends, the people who look after your kids and the people you work with that you are leaving knowing one of the reason is because Haiti does not have any good hospitals.  We know we did the right thing and God very clearly provided a way home but we will still wrestle with those feelings of leaving. Thank you so much to anyone who prayed for us, it has been overwhelming (again) to look at facebook and see people from the UK, Canada, the US and Haiti praying for us, friends of friends who we have never met or maybe had no idea who we were before Wednesday.  So now we are home safely I am going to ask all who prayed for us to start to pray for Haiti.  Coronavirus could be utterly devastating in Haiti and it would only be by a miracle of God that it won't be.  Like everywhere there is some good advice out there in Haiti, wash your hands and stay at home but there is also a lot of false information.  When we drove to the airport in Cap Haitian Haiti just looked like any other normal day, so not many people are following the advice.  As of today Haiti has 15 confirmed cases out of 105 tests.   We know testing will not be easily available so looking at statistics will not give us a clear picture of what is going on.  Please pray with us:

- Pray that people will follow the advice given.
-We know it is impossible for people to stay home in Haiti, most people have no electricity or       running water pray that those who can especially older people, vulnerable people and those with pre   existing conditions will be able to stay home.
-Pray for God's protection over Haiti.
-Pray for doctors and nurses all over the country, they do not have the supplies necessary to protect   themselves or treat patients.
-Pray, somehow supplies will be sent to Haiti.
-Pray, that is the midst of yet another crisis in Haiti, that many would turn to Jesus.

Thank you again....we hope to see you sometime.... there is a lot more on my mind but that will have to wait for another time....now I had better go wake everyone else up!