Apart from physio in the clinic and in Milot there are some other people I try to go and see each week. One of which is Sterlina....I hadn't been too see her for about a month for a couple of reasons but I got the chance to go see her on Wednesday and she is doing really well actually. She is really growing and is almost taller than me which I guess isn't that hard but she is only 14. She still is not really liking where she is living I think she would much rather be with her family in Port but as I explained before her family say there is nothing they can do for her and she is much better where she is. Her wee foot is still not totally healed yet but when it does they are going to give her a prothestic foot where she lost hers. She also doesn't want to start school because her foot isn't healed yet, although I have been trying to tell her she doesn't need her foot to go to school!!!Please continue to pray for her, that she will settle better where she is, she has had so much to cope with over the past 8 months being in the earthquake, thinking her whole family are dead then finding out about 6 weeks ago they are actually alive but they don't want her. Continue to remember her please.

Mono is a wee boy I go and see every week. He has CP and lives just about 10 minutes walk away from our compound. He has a really lovely wee family, his mum works for the mission and they have 6 kids, 3 girls and 3 boys. He does very well with his CP, his is mobile and does lots of things for himself. So I have just been going to teach his mum and dad lots of exercises they can do to help him abit more. 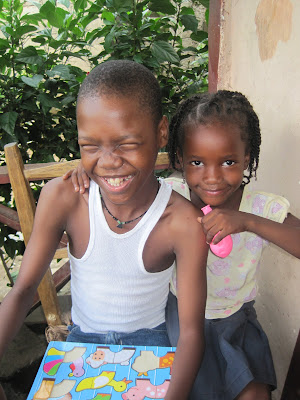 Carlos is doing really well and so is Rosette. I had been going to visit them in their house and just this week Rosette has been back at work just this week. Last time I was here she cooked and sold food out the front of the clinic then after her daughter had been sick she got really sick and was just at home. I was so happy to see her back at home, there are 10 people who live in her house and she is providing for them all so it is great she is well enough to be back at work again. I have another wee friend who comes to see me his name is Phaly, he is only 9 and he used to come visit me in the clinic with Carlos. A while ago he came to me and asked if I could help him with school because his mum died last year and since then he hasn't been able to go to school. So I talked to him and his brother, turns out he is Carlos' cousin and his granny is also Rosette. We managed to get him into starfish and my sister is sponsering him to go to school, its just cool how they are from the same family and now both my sisters are helping Carlos and Phaly to go to school through starfish. 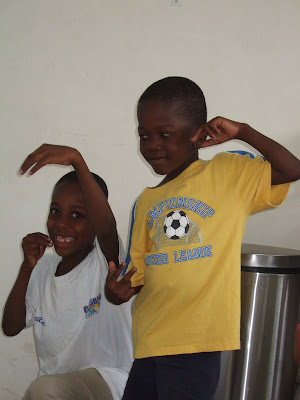 Junior- Junior lives in Saccenville where our seminary is, in May Stacey (one of our missionaries here) told me she had someone for me to see. A young guy who was totally fine and now he is paralysed and cannot walk and they are not sure why. Hannnah and I and Dr Phil who was here at the time went out to see him. He is a young guy who used to live in the states and was sent back to Haiti, however when he came back to Haiti he became a christian and turned his life around, now he is married and his wife is about 6 months pregnant. So he told us he was totally fine the one day he got up and his legs felt itchy and funny and then he felt something go through his body and sure enough after that he could not walk his legs were really weak. We went to check him out and that is what we found, he was really weak with abnormal sensation and unable to stand. Neither Phil or I were really sure what was wrong so we brought him to the clinic the next day for some blood tests. I assessed him properly from a physio point of view and it really looked like something neurological but I wasn't sure what. We got him standing at a frame and I give him loads of exercises to do at home and have been going out to Saccenville to continue treatment in his house. He is now walking with the walker and takes a few steps by himself but is pretty unsteady. Everytime we go he is just thanking God for how much progress he is making. 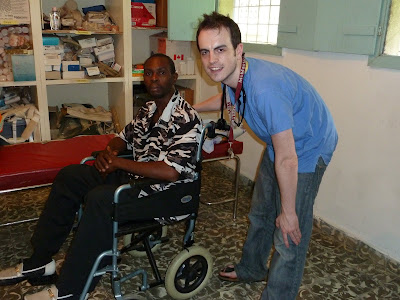