Bethesda has been through and is going through a very difficult time.  The past 18 months have been hard and full of uncertainty regarding the future of Bethesda.  In March of this year our newly formed board made the decision to move forward with buying a piece of property, and making plans to build a new Bethesda.

Once the decision was made, I felt a huge weight lift off my shoulders, we finally had a firm decision and it was exactly what I thought the decision should be.  Not only were we having property issues (the property is rented from another organisation) but our buildings are old, dirty and not fit for purpose.  Not anywhere near the standard they should be to provide good quality care.


But finding property has been very hard.  Property in Haiti is extremely expensive.  Given the size of our clinic now and allowing room for expansion property can range from $200,000 to $800,000 (US)!!  We are now very close to having a piece of property but it has been slow because of the political crisis we are experiencing right now.  It is difficult to get anything done with road blocks, protests and many banks and businesses shut.  Please continue to pray we will be able to secure a piece of property soon.

As I mentioned Haiti is right in the middle of a political crisis. Our patient numbers are very low and because 80% of our income comes from patient fees our in-country income is down.  As the political crisis continues, the price of everything also continues to rise.  What that means for Bethesda is all our medical supplies, medicine and office supplies are getting more and more expensive each week.


A few months ago this box of small bags (which we use to dispense medicine in) cost 600 gourdes.  Today it is 3000 gourdes. 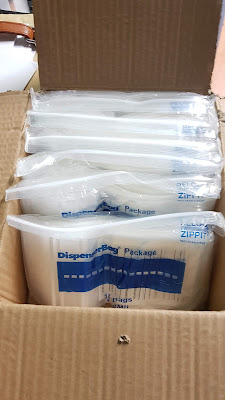 I could give you many many more examples but you get the picture. 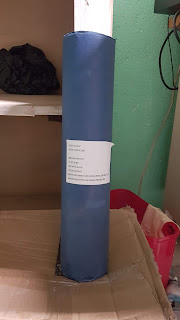 Our patients are suffering more and more, we have even had patients who cannot afford to come for therapy, which only costs 100 gourdes (80p or $1 US) because of the increased cost of transportation.
Before this past 6 weeks spending the money to come to Bethesda was already a sacrifice.  Today I don't know how anyone is doing it. 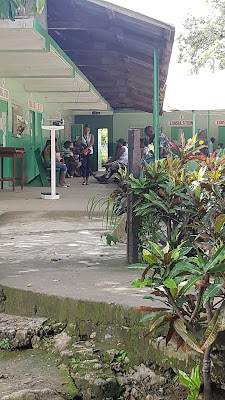 I've been pretty discouraged about the whole situation, things are moving slower than I thought with the new building.  Our income is down, our expenses are up and there doesn't seem to be any end to the current political situation.

But then I reminded myself of a conversation I had with Ms. Prudence a few weeks ago.  She had so many stories of patients she had helped she didn't know where to start.  Let me just share a couple with you.


Recently, an elderly lady came to Bethesda with her son.  When they arrived, he was looking around like he was searching for someone.  Ms. Prudence noticed them and went over to ask if she could help.  The man told her his mother had been ill for over a year with bleeding from her womb.  They had been to many different doctors but one time after another she was told she had an infection and given antibiotics but was not getting any better.

Ms. Prudence took this lady into our treatment room, took a history and did a physical examination where she realised this lady had cancer.  As she had been ill for a long time and cancer treatment is very difficult to find in Haiti, Ms. Prudence knew the only thing we could do medically was make her comfortable...but there was something better we could do.  Ms. Prudence explained to the lady she was very ill and unlikely to get better, that there was no medical solution for her illness but there was a solution that could be found in Jesus.  Ms. Prudence had the opportunity to share the gospel with this lady.  She then went to see Dr Rodney where he continued to talk about the gospel and what that meant for her life, that very day this lady accepted Jesus as her Saviour.

Ms. Prudence told the lady's son what was wrong with his mother and that she would not get any better.  The man, who is already a Christian, explained that, that very morning when he arrived at the gate of Bethesda he prayed ‘Please God help me find someone who knows exactly what is wrong with my mother so I can have an answer.’

This man was overjoyed to see that God not only answered his prayer but also saved his mother. Even though she will continue to get sicker here on this earth they now have hope in Christ that one day she will go to a place where there will be no more sickness, no more suffering and no more death. 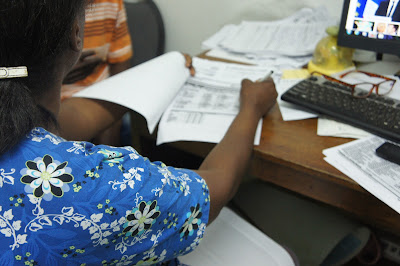 The next story is about a young man who had been ill for a while with a cough and generally feeling very unwell.  His family told him it was Satan making him sick and he really should go to a witch doctor.

This young man had heard the name Jesus but didn't know anything about Jesus, he really didn't believe in the witch doctor but felt so much pressure from his family that he visited three times.  Each time he continued to get sicker and sicker.  Then he decided to come to Bethesda.

During his inital consultation he tested positive for TB, he was assured if he took his medicine he could be cured from TB.  He was also told who Jesus was and what He had done for him.  A few weeks later he came back for his follow up appointment, feeling much much better and that day decided to make a decision to follow Jesus.

He told us he hoped that his decision to follow Christ would show his family that Satan was not making him sick and that following Jesus is the only way. 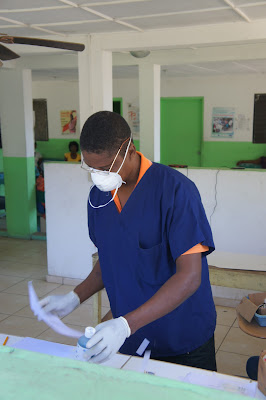 Despite all the problems facing Bethesda God continues to work through our staff on a daily basis.  We exist to share the truth of the gospel and the love of Christ by helping the sick in a country where it is difficult to find good, quality, affordable healthcare.

I would like to end this post with a crazy idea that came to me today after lying awake half the night last night thinking about the problems facing Bethesda.  I'm not sure if this is from me or maybe the Lord gave it to me.  But here it is: what if we had so many monthly donors that we could actually lower our patient fees?  What if Bethesda was the ONLY place in Haiti lowering prices? What a testimony that would be to the gospel!  We would have a huge opportunity to show people that we REALLY care and that we are there to share the love of Christ.  We can show the people of Haiti that Bethesda is for them especially when it feels like everything else is against them.  The beauty of this crazy idea is that we serve a God who can do it.

Perhaps God is asking you to be part of what he is already doing and going to do in Bethesda.  If you feel led to give once or a monthly donation you can do so online

Dr Rodney is a man of great faith, I mean who else do you know that does an entrance exam into medical school in a language he doesn't know, passes the exam, and then goes to medical school without a penny to his name trusting in God to provide?

I hope that I have even a fraction of the faith Dr Rodney has and that God will take my little tiny mustard seed faith and make it move mountains.

“You don’t have enough faith,” Jesus told them. “I tell you the truth, if you had faith even as small as a mustard seed, you could say to this mountain, ‘Move from here to there,’ and it would move. Nothing would be impossible.”  Matthew 17 v 20

Hebrews 11 v 1
Now faith is the assurance of things hoped for, the conviction of things not seen.