Physio works after all

Today was one of those days when I love being a physio (I don't very many of them!!). I have been out at Milot and working in the clinic. There is also another physio here from home, Heather she arrived last Monday and she is here for 3 weeks, it is very nice to have someone from Northern Ireland here.
Anyway I was so tired today on the way out to Milot, its like an hour and a half drive and I'm driving and to drive in Haiti you have to concentrate....alot. To be honest I felt way too tired to do any work. So I went over to the paeds building first cos I knew that would give me some motivation to work and wake me up a little. 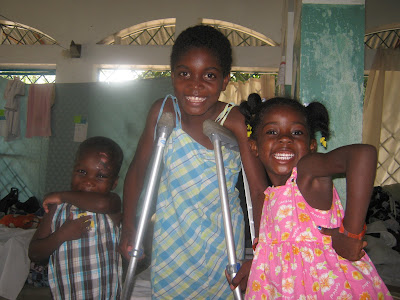 After that I went over to the main tents and I stopped to talk with a guy who I always say hi to. I had spoken to him and his friend the first day I was there, both of them had become christians after the earthquake. So when I go I always pop my head in and say hi. Today he called me in and I said how are you? He said I'm not happy with you. Im like oh why? He said you always come and say hi but you haven't prayed with me again, so I did. Then a few more people came over and said Julie will you come and pray with me.

Its been great to go to Milot and see an improvement in the patients, so many of the teams are just in for a week. We got to do a couple of exciting things today. Heather and I got out the PAM aid. Its a physio thing you use for amputees to prepare them for prothesis. Today we got up 2 people who were double amputees, we put the PAM aid on one of their stumps and got them up stand with a frame and us helping. This is only the second time they have been able to stand since the earthquake, it was so cool to be able give them that opportunity. 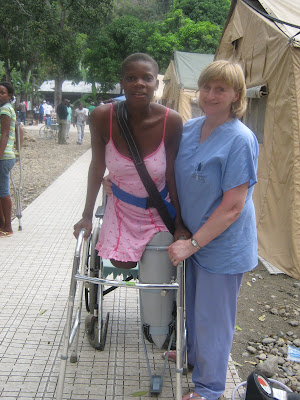 The PAM aid.
But the best bit was when we went round to the paeds building and there are a couple of amputees there, so we took it round. At first the looked at it as if what is that and there is no way I am going to use it. But I explained and told them it wouldn't be sore so lets try it. So we tried it on 2 girls, there are a couple more but they are too wee for it. This is the first time they had tried and it been able to 'walk',before they have been hopping about on crutches. Honestly the look on their faces was brilliant, if I ever have enjoyed being a physio it
was today 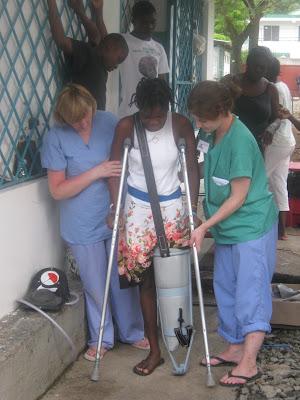 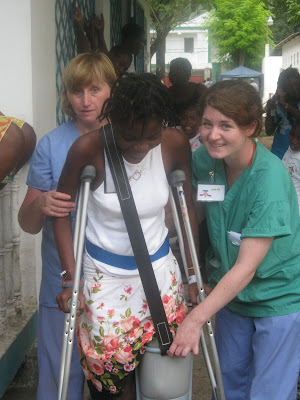 A terrible photo of Heather and me but I hope you can see the look on the patients face, it was great.
That all was actually yesterday but being a physio today was good aswell. I discharged my first patient from the clinic. It was Anicee the guy who was in the earthquake and lost all movement in his hand and wrist, Pastor Lucner's brother. He has full movement back in his whole arm and it is nice and strong so he doesn't need me anymore. I still sort of can't believe it, 6 weeks ago he had no movement at all in his hand. I did have another patient a wee lady who had a stroke just 4 weeks ago. I really praise God I worked in the stroke ward in the royal for that short time because I have seen alot of strokes here and I really wouldn't know what to do if I hadn't have worked there. So this wee lady is now walking and today was the first time she got movement in her hand and you should have heard her husband it was brilliant. Really physio shouldn't be working that quickly, she is only coming to me once a week, its just impossible to ask them to get a tap tap with someone who cannot walk and bring them here everyday, so Im teaching the family and they are doing all the physio at home. And they are doing a great job!
Although you never get away from suffering in Haiti, even among all the good stories of people getting better there is always people you wish you could do more for. The last patient I saw today was a wee girl who was 2years and 4 months. Her mum brought her in and here is her story. Her mum has lost 4 babies all when she was 6 or 7 months pregnant, the girl she has now was born at 7 months in the hospital in town. Her name is Ashkala. She was fine after she was born and developed normally, then 9 months ago she had a seizure and was taken to hospital. Since then she cannot move at all, cannot hold her head up, she cannot talk and cannot eat very well at all. Her mum came because she heard we have someone in our clinic who works with children who are like that. After a few minutes talking to her I noticed Ashkala was seizing and I asked does she do this alot, her mum replied all day and all night. During the 40 minutes she was with me, she has 3 small seizures. After chatting with her I found out she is supposed to be on medicine to control the seizures but her mum does not have any money for it. Here she is a lady is in her 30's, lost 4 babies already, her husband is very sick and she looks after him aswell as her sick child. There is no possible way she can work. I told her the most important thing she can do right now, today is get the medicine to control the seizures but she just doesn't have it.
I give her money for today's perscription, I really don't like giving people money directly but I had to. I explained I cannot do that everytime because I won't be here forever, we need to figure out a way she can make money to buy the medicine. Only after the seizures are under control can we start with some physio.
Then this is what she said to me 'I know what I need to do and only God can help me, no-one else. I used to be a christian, used to walk with God but I lost my way,  I lost 4 babies then God gave me one. And when she got sick I began to pray again, I began to walk with God again because I KNOW God can do everything. He can do much more then any man can do for me if it is his will he can heal her. I am trusting in him to help me.'
I was just blown away, alot of people would more than likely question God...why the only child she has had to get sick  like that. Yet it was that which caused her to come back to God. And she firmly believes nothing is impossible with God. Please pray for her and for me as we try to figure out what is the best thing to do to help her. 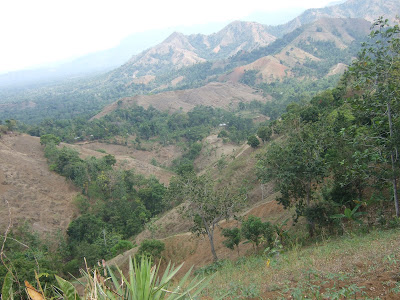