This last week was the anniversary of our radio station here 4VEH. The radio had been broadcasting for 60 years here in Haiti. There have been thousands of people who have been saved through the radio station, OMS gives out solar powered radios all over the north of the country and for some people this is the only time they will ever hear the gospel, for others who have become Christians through the radio this will be their only access to hearing the word of God. 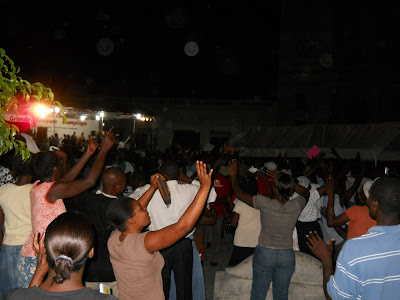 
Last week we were running a big crusade right in the centre of town and Saturday night was the big night to celebrate the anniversary of the radio station so Hannah and I went along. The big attraction on Saturday night was ‘Ti Bob’…Haiti’s biggest Christian artist!!! He really is big in Haiti and everyone loves him. I was just standing there listening and watching, if I was at home right then I would have probably been at the snow patrol concert in Ward Park along with thousands of other people with their hands in the air almost worshipping Gary Lightbody and his band. Yet here I was, the complete opposite, in one of the poorest countries in the world, standing in a square with thousands of people with their hands in the air except they weren’t there to worship a man they were there to worship their God. The God who saved them and has given them freedom and life. In a country which looks so hopeless these people have hope. 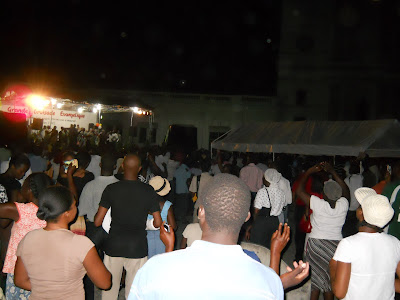 Throughout the week they had alot of people come to the Lord including a witch doctor one night. Please pray for these new believers, that they wouldn't just have made a decision in the moment but that the decision would have truly changed their lives. Pray that they will be disicipled well and find a church with good solid teaching and be able to be a witness in their families and their communities.

Here is a personal testimoney....

'No one knew Evodie was making plans to kill herself. Except God. And just wait til you read what happened next.
Feeling ashamed and humilated by the father of her unborn child, Evodie went to the market and bought 2 sachets of rat poison. Back home, she ripped open the sachets, emptied the poison into a bottle of coke and prepared to drink.

As she put the poison to her lips, the electricity came back on after one of the frequent power cuts in Cap Haitian, and she heard the voice of radio 4VEH presenter Louisa Destine, in her programme, time for comfort, saying 'I greet you all in the name of Jesus'
Evodie listened as Louisa began speaking directly to her: 'You with a drink infront of you, you have put something in the drink to take your life. This is not God's will for you.'
Convicted by the holy spirit, Evodie says of that moment, 'I fell on my knees before my Lord and asked forgiveness for what I was about to do.' In her time of need, the Lord intervened and saved her life, and that of her unborn son. God spoke directly to Evodie in a way she would understand-through Radio 4VEH.

Here is another story from a book called Let the rocks cry out with gives the history of 4VEH. It really is amazing how the radio has touched so many lives.

'Let the rocks cry out is bringing more people to Christ than perhaps any other single program on 4VEH. Since its beginning in November 1996, scores of conversions have been reported, many of them young adults. According to one listener, when the program is aired , 'every radio in Haiti is tuned to 4VEH'
The hour-long broadcast is Creole on Monday and Wednesday evenings features gripping interviews with people delievered from the bondage of Satanism and voodoo.
In May, Radio 4VEH aired the powerful testimoney of Mr Ludovic, a former voodoo priest converted 8 years ago by the witness of the woman now his wife. Ludovic was well known in Haiti for his satanic activities and murder, even of his own family members.
Now he was speaking out for Jesus Christ, telling of God's power that freed him from the bondage of fear and evil under voodooism. Response to his testimoney was electrifying, listeners requested tapes of the broadcast.
In the village of Port-Francais, ten miles south of Cap Haitian, a voodoo priestess heard Ludovic's astounding testimoney of God's transforming power. 'If God can save Ludovic He can save me!'. She did an abrupt spiritual about-face and accepted Jesus as her personal Saviour, challenging her allegiance from Satan to Jesus. Years earlier, a 4VEH pre-tuned radio had been used by God to plant a church in this area.' 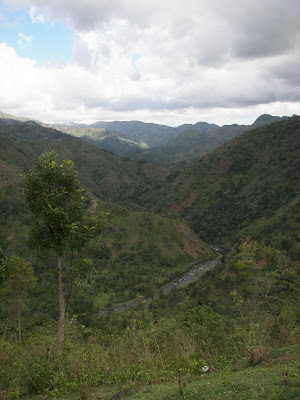 Yesterday, Friday I had the opportunity to go with the team out to go and give out these solar radio's. I was going as a translator and it was a priviledge to be a part of it. I had heard so many stories of solar radio's being given out and people becoming christian's through radio 4VEH in a remarkable way but this is the first time I had been directly invloved.
We met at a wee church in a town called Balon, the church was planted in 2008, after a pastor evangelising in the area and alot of people getting saved. They were travelling far to go to church in Goden and the Pastor of Goden had a vision to plant a church in Balon. But they had no where to meet. For 7/8 months they met outside under a tree. Then someone in the community offered a room in the middle of their house for them to meet. It is a wee tiny room and each sunday they have around 50 people meeting. The Pastors words were ' we have to cut our service short (2hours!) because it gets so hot inside people are dying!!'. I was in it for about 10 minutes and it really was roasting, I cannot imagine what it would be like with 50 people inside. Right now the church is praying for a new place to meet with more space and somewhere a bit cooler! 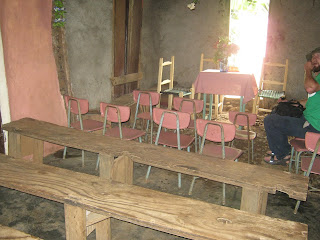 The wee church
We split up in 5 groups, 3 people from the team, 1 translator and 1 local person from the church. Actually the pastor was in our group. We visited about 10 families in their homes and with each one shared the gospel, that God had sent Jesus into the world to die for our sins, and if we continue to live in sin, to live without Christ then they are lost. But if they accept God's gift of salvation then they will have eternal life. Alot of people we meet already know the Gospel. Within the 5 groups they spoke to between 50 and 60 people, some of who were already christians, some who were prayed with. Alot of people have made a decision to accept the Lord but don't really believe they are saved and need the encouragement. We also spoke with around 18 (I can't remember exactley) became christians, and they were encouraged to choose a church in the area to start going to. Also the Pastor will continue to visit these people. Each house we went to visit we also got the opportunity to give them a solar radio which is tuned to Radio 4VEH. 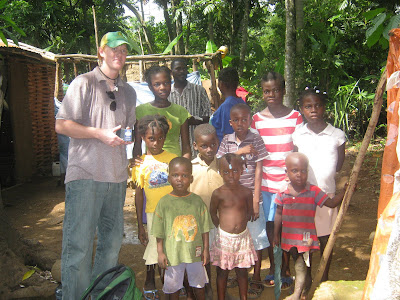 Giving the radio to a family (I don't think all the kids were from the same family)
It was a really great experience and amazing to see how solar powered radio's are changing people lives all over Haiti.
at June 12, 2010