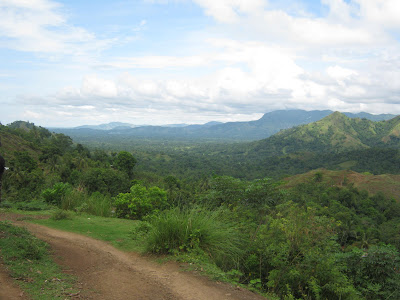 The walk up through the mountains
This weekend ten of us went off to do a mobile medical clinic in the mountains in a place called Suffriere. We had a team of 12 of us, me and Hannah who ran the pharmacy. Dr Phil who is from Northern Ireland he is here for 3 weeks he was consulting along with Ms Prudence who is a nurse in our clinic. Wadner, a good friend of mine who lives in Vaudrieul close to our compound. We also had 6 of our seminary students come with us to evangelize/encourage and pray with patients. Our seminary students were Nicole, Yoland, Jean-Marc. Jean-Marie, Devacoeur and Gesner. Four out of these six students were studying in Port au Prince before the earthquake and their seminary’s were destroyed. Our seminary had an announcement on the radio saying there were offering places for free to students who were in Port during the earthquake. The pastor of the church is Ms Prudence’s husband, they have been working in that area for 20 years and he goes there every Sunday. It is a very very poor area and the people have nothing. Their closest medical care is probably down here in Cap Haitian. 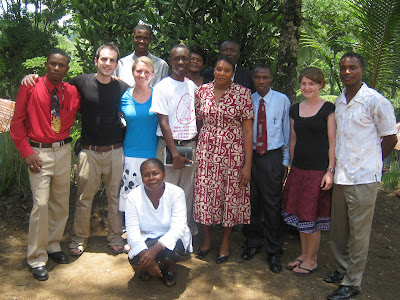 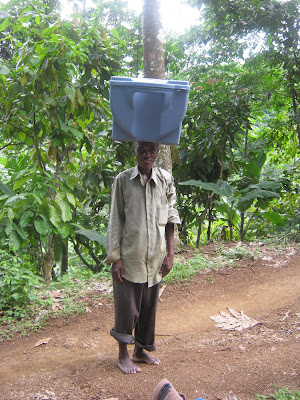 One of the men from suffriere who carried our medical supplies 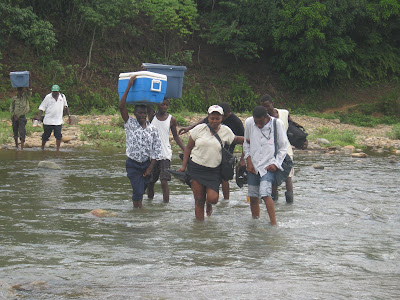 Going through the river

We left at 6 on Saturday morning and went to pick up Ms Prudence and her husband, they put their stuff in the back of the truck and the next thing to go in was 2 chickens with their feet tied up, obviously going to be one of our meals over the weekend. We stopped off along the way to get some Tampico (Haitian version on sunny delight), then to the ‘ice factory’ to get a big block of ice. And after an hour then it was time to walk, 2 hours up the mountain but it really is a lovely walk. Some guys came down with a couple of donkeys to take all the medical supplies up. So after 2 hours we arrived at the church where the clinic was going to be held. 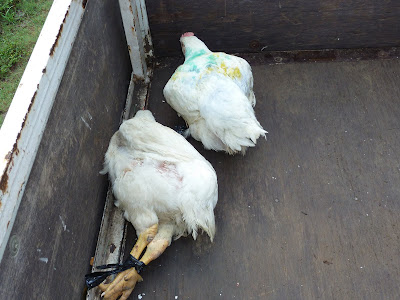 They turned out to be dinner on Sunday 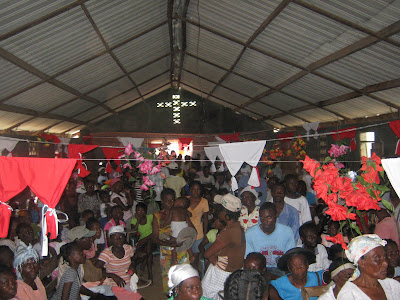 The crowd waiting for us in the church

Inside the church was pretty crazy, we think there was maybe around 400 people there who had come to see the doctor and there was no way just between Dr Phil and Ms Prudence they were going to see them all. Ms Prudence went round and give tickets to those people who were most sick so they could be seen. We The clinic actually ran very well, people got their dossier (a wee card) and waited in line to see the doctor, then were sent to the pharmacy to pick up their medicine, then sent over to speak with the pastor. We also gave each patient bread with peanut butter and a tampico while they were waiting. There were a lot of people there who had been in Port during the earthquake and it was great because a few of our students had been in Port on 12th January (the day of the earthquake). So they were able to counsel and pray with those patients. One lady was in her house with her 4 children and she was able to run out with one of her kids but she lost her other 3 and her husband and is just struggling. 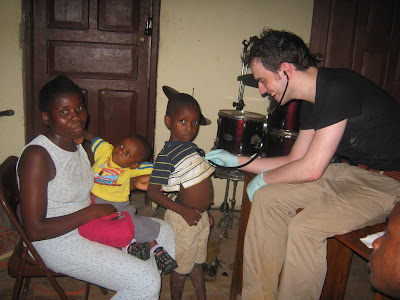 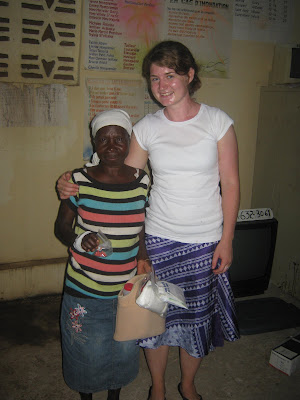 I just had to put this photo in cos this wee lady was so cute. I am not the tallest person in the world but I felt tall beside her.

We took a short break at 2 o’clock and just about 5 minutes before it started to rain, like really started to pour. Which actually was a good thing for us because a lot of people left and just the one minute before our wee break finished the rain stopped and the sun came out. So we were praising God for the rain and for the timing of the rain. We finished around 5 after seeing 200 patients. The seminary students got the opportunity to pray with a lot of people and they also found some people who wanted to be saved. 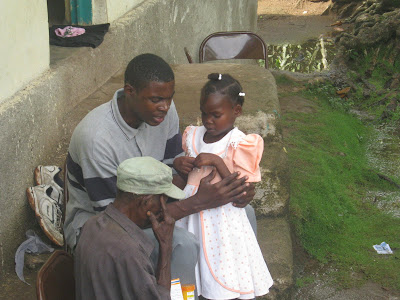 The next day we went to church, they have around people in their church. I have no idea where the people come from because there are hardly any houses close by! Sunday in Haiti was mothers day and they had a special children’s choir to tell the mum’s happy mothers day. The seminary students took the service and we all sang together, after lunch we headed back down the mountain and back home. 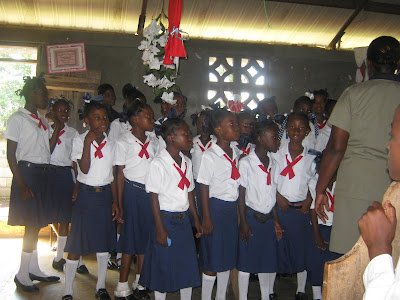 The children's choir for mothers day

We just praise God for the weekend, for the opportunity to and treat people both physically and spiritually. Praise for the seminary students, they are just brill.

We are planning to do more clinics we just need some doctors so please pray God will send some more doctors to us. 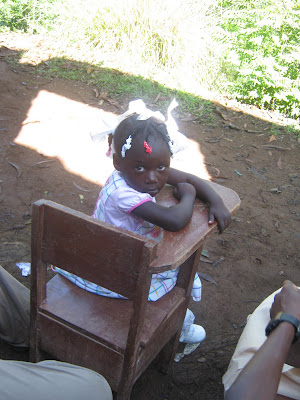