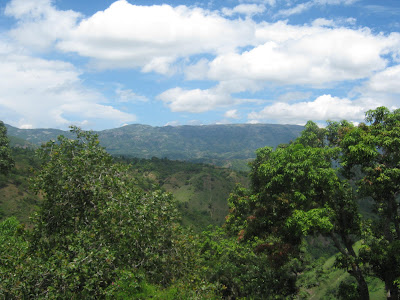 On the walk up
One of the places I went with Dr Gavin when I was here before in 2008 was Roque and before I even got back to Haiti I knew I would try to do another mobile clinic there. We were joining together with Tim Randoph a Lab Tech from the US who has been to Roque a few times with Gavin. I had planned the dates with Tim a long time ago but here in Haiti I could not get hold of the pastor, I was lying in bed one night 2 weeks ago thinking I need to figure out somewhere else to go because if I cannot find Pastor Christianne then we cannot go. Then next day he came to the clinic and said he heard I was looking for him, only in Haiti could that happen. 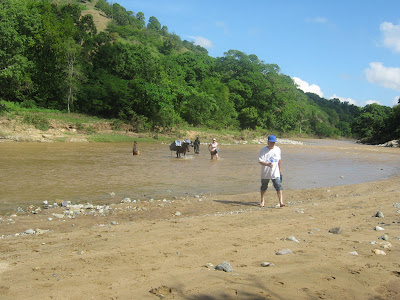 We just went up to Roque this past weekend and had a wonderful but difficult weekend but also feel extremely blessed to be there. We had 9 in our team, Dr Rodney, Tim, Lori, Christiana, Melissa, Erin, me who were all working in the lab, taking vitals, working in the pharmacy, then Betty and Wadner who were praying with people. We left Vaudrieul here at 5.30am and after about a 2-3 hour drive over awful roads, we arrived at the bottom of the mountain. Roque is right on top of a moutain so after 2 hours walking uphill we finally arrived. Roque is one of the most beautiful places I have ever been in, as you are walking up the scenery just gets better and better, about half way up you think it can't get any better until you get to the top!! 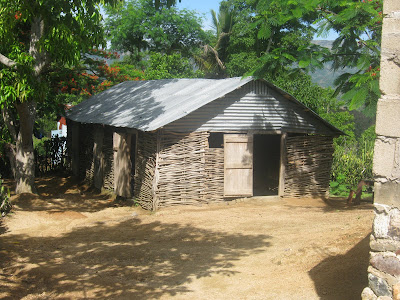 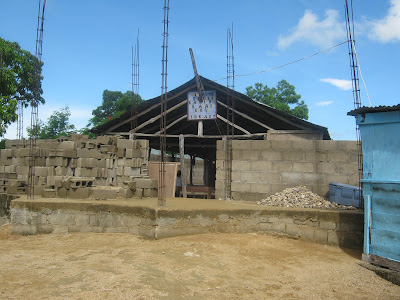 The church now, before the walls were sticks and they are beginning to build a church with blocks. However for each block to be brought up the mountain it is $1 haitian. To put it into prospective 8 blocks would cost $1 US, just to be carried thats not including paying for each one.

We had a quick break and quickly got set up. Very often in Haiti when we run clinics people 'fe dezod' which basically means they go a bit crazy pushing, shoving, shouting to make sure they get to see the doctor which in some circumstances is understandable considering they have no other means to see a doctor. But the people in Roque are not like that. I'm not sure how I can describe Roque, I have no idea how people live there to be honest. Their closest doctor is 5 hours away, they have no where to buy food, clothes or anything else they need, no where to even make money. They live off the ground, if they plant potatoes, everyone eats potatoes, if they plant corn, everyone eats corn. To make any money they take anything they have grown down the mountain on a donkey, go to the closest 'big' town which is Baron sell what they can and with the money they make they buy some rice to take back to Roque. When I am in Cap Haitian I can look and see the people here are poor and don't have very much but in Roque those people literally have nothing. Nearly every single child has the red tinge to their hair which is a sign of malnutrition. Yet despite all this, despite them having nothing the people who live in Roque are content. Not one person asked me for anything....it is very unusual to go somewhere in Haiti as a white person and not be asked to give someone something. Nearly every child can say 'give me 1 dollar'!. Not in Roque, the people there have never had anything, they do not know what it is to live having money and the most important thing most of them have is God and because of that they are content in the situation where God had placed them. 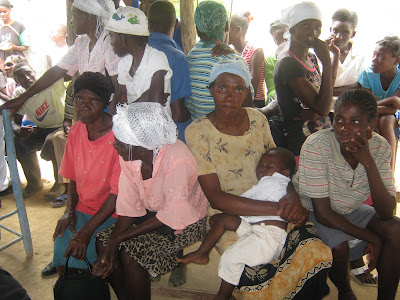 Waiting patiently for the doctor
Friday we saw 100 patients, and Betty and Wadner prayed with almost everyone. Alot of the people who came are already christians and we were able to encourage them. Friday evening we had a short service in the church we heard at the church there was a girl who was just 17years old and 9 months pregnant who was not well and the pastor asked us to pray for her. That evening they brought her to the church around 11pm, she was in a seizing and very unwell. Dr Rodney knew straight away she had pre eclampsia, she was not responding to anything and was seizing. We did not have the medicine with us she needed, it was the middle of the night totally pitch black and the top of a mountain, 5 hours away from the nearest hospital. The only thing we could do was basic first aid and pray. The whole church was outside praying and singing. At around 1am we decided we have to get her to hospital. So explained to the family, gave them money and they carried her down in the pitch black, hired a car at the bottom and took her to the hospital. We did not sleep at all that night just worried for her. Despite that the next day Dr Rodney worked like a trooper, and we saw 220 patients in just one full day. Dr Rodney's rule was we were not finishing until all the medicine was gone. At one point it started to pour and Haitian people being Haitian they hate the rain, so no-one wanted to leave. I think we had around 100ish probably more people in the church, with Dr Rodney still consulting and us giving out medicine in the pharmacy yet it was totally fine , the people were just great. 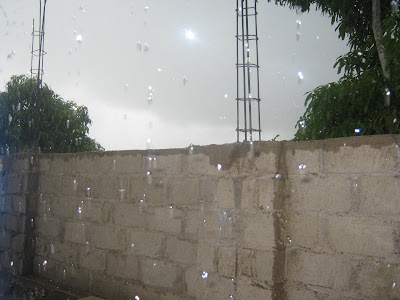 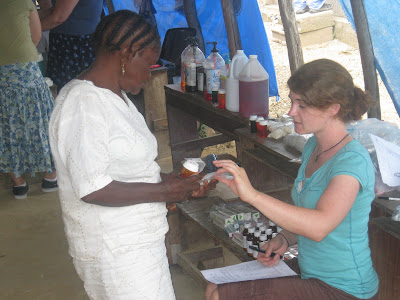 By the end of the day I couldn't even stand anymore!!Giving out medicine at the pharmacy.

Sunday morning then we had church service, Dr Rodney preached wonderfully on God has not forgotten you. We came down the mountain on sunday afternoon and back home on Sunday evening. We heard news over the weekend, the young girl who is called Diana was taken to the hospital, they did a Caesarean section and the baby had already died. Diana was still alive but has not yet began to speak so please pray she will make a full recovery from this.

There were  a few things which happened before the weekend which made me think it wasn't going to work out. But it was so obvious that God wanted us in Roque that weekend, when they brought Diana into the church I really couldn't understand. It had been nearly 2 years since a doctor had been there and the one night there was a doctor there was nothing we could do for her, at least not medically right there at that time. However we were able to pray, we were able to give her family the advice about what to do and we were able to give them the money to do it. 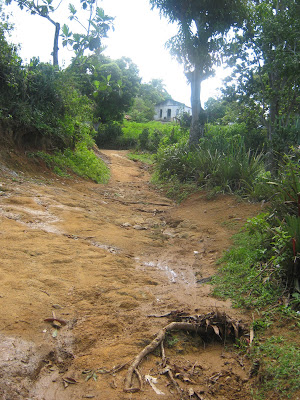 We just praise the Lord for the weekend, for all the people we were able to help medically and spiritually. It has also been amazing to see the effect being there has had. Wadner one of my Haitian friends said to me after the church service....'I always hear american people say they take for granted what God has given them and that now after he has been in Roque he feels that is how people in Cap Haitian are, they take for granted what God has given to them.'. It is very humbling to hear that. Also in the clinic on Tuesday Dr Rodney preached on phillipians where Paul says he is content in all situations whether he is poor or rich. He talked about the people in Roque not having anything at all yet they are content because they have God and he challenged us to be the same, to not look for or want material things but to be content in what God had given us and what he has done for us. 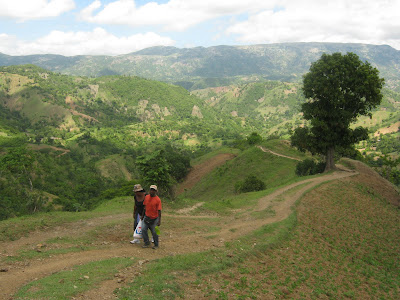