I have told a few you about a few people and just wanted to give a quick update about how they are doing...

Sterlina- My wee friend from Milot who was in Port on 12th Jan. She had been told her whole family were killed and so after being in Milot they sent her to live in an orphanage in Cap Haitian, I have been going to visit her every couple of weeks. I was out last week and she just found out her family are actually all still alive, her dad is ill but he was ill before the earthquake, her mum was hurt in the earthquake and is still healing and all 6 of her brothers & sisters are fine, they are also all together in Port right now. She spoke to her family on the phone, her mum said to her, I already have 6 kids who I cannot look after, I cannot do anything for you, you would be better staying where you are. I asked her what she would prefer to stay somewhere where she is well looked after with food, clothes, somewhere to sleep and school to go to or be in Port with her family where none of that is guaranteed. She just told me she didn’t know. I’m not sure what she was thinking though. But she is having a hard time, having grieved for her family who she found out are now alive but she has no way of seeing them. 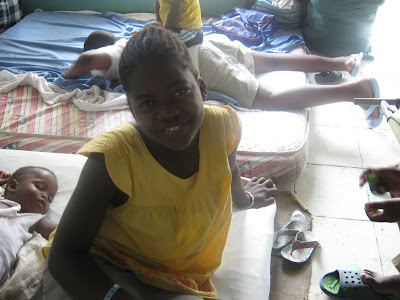 Berlota- He is the young guy I met who had fallen out of a tree and had been lying at home and developed a huge pressure sore on his lower back. He is still in Milot, they cleaned out the wound, give him anti-biotics for infection, and are changing the dressing’s every day. I had a chat with him the other day about the future what he thinks will happen. Education, especially health education is very limited in Haiti and he really had no idea he would ever be able to walk again. I had to explain to him why not and what he could do once his back heals. He has been sitting up by himself over the edge of the bed which is great. There is a plastic surgeon out in Milot this week and they may do a procedure to help it heal much quicker. Please continue to pray for his healing. Also praise God for someone from home who has donated money to pay for his medical bills.....God provides. Especially when we obey him, the first time I met Berlota I knew I couldn’t not do anything yet I had no idea who I was going to pay for things, immediately God provided a way without me even doing anything or asking anyone. 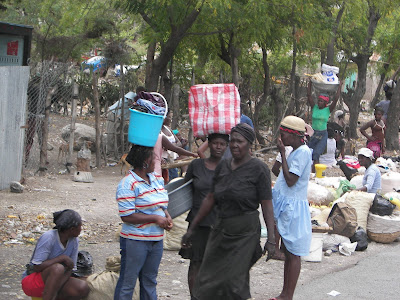 Auguste- This is the lady I met with the sore hip. I sent her to Milot hospital to get an orthopaedic opinion. She is really in a bad position, she has had infection in her hip probably for a couple of years and her hip replacement is not in a good position at all which is why she is in so much pain. I spoke to the doctor (he was an American) he explained even if she lived in the states it would be very difficult to find a hospital to give her the treatment she needs. Our only option here in Haiti is painkillers and some antibiotics which will maybe probably not do much. She has 5 kids and I have been trying to talk to her about a way to find some sort of work to do. Even though that is going to be really difficult, but she has to otherwise I have no idea how she will live. Please pray for her as she accepts there is nothing we can do here in Haiti for her from a medical point of view. Also pray God will give us a way to find some sort of work for her to do. 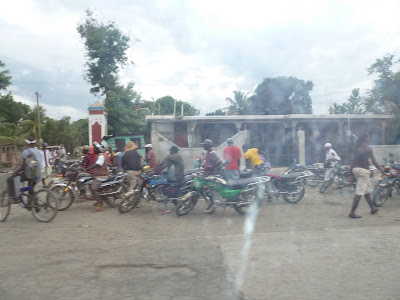 Ashkala- Its really her mum I would want you to pray for, her name is Myrlene. She came to see me today to let me know her husband who had been really sick for a couple of years just died on Wednesday. I had talked to her about two weeks ago and she told me she thought he was close to dying. Then she told me she took ashkala over to an orphanage on Friday. She told me not because she doesn’t love her, because she wants the best for her, and maybe by putting her there they can look after her well and provide better medical care. Myrlene is really an amazing lady, I told her if all the things that had happened to her I do not know how I would be sitting there talking to me. She replied ‘it is only by God’s grace that I am able to sit here and talk to you. I used to go to church then I left but as all these happened to me, I had 4 children and they have all died, just ashkala who is still alive but she is suffering alot, but everytime I see her I give God thanks for her because out of all the children I had have she has lived the longest. I came back to the Lord, began going to church again and God has given me so much strength to keep going. It is only by God’s grace that I am alive today, that I am able to come and talk to you today.' Myrlene has had such a difficult time and everytime I see her or talk to her she never asks me for anything other than to pray for her which is unusual for Haiti really. She is such an example of faith, so many people in the same situation would question God why he was letting her suffer so much. Yet she does not look at it like that, She is a strong strong christian and an amazing example of God's faithfullness and strength. 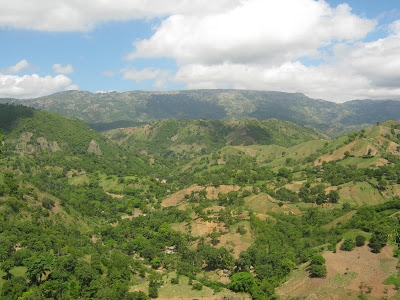