This is my June prayer letter which I could not get uploaded to send home because of internet or lack of so a few bits are a bit out of date I will update them a little as we go along!!
Milot Hospital
Things are still busy at Milot, there are around 80 patients still there. There are less visiting teams so more work for me!A lot of the patients are ready to go home but have no possibility of getting there. The prosthetic lab has been up and running and teams have been coming in for 5 days at a time and working really hard even through the night to make the prosthesis for the amputees. All of the kids got their’s done, it was great to see them walk with their prosthetic leg for the first time. Just last week, Maragret and Joseph who are double leg amputees got both of their prosthesis. They were a little anxious getting up on their new legs for the first time however once they were up they felt great. They are doing physiotherapy everyday to get improve their walking. Joseph is 2o and was in Port for university during the earthquake, his family are from another area in Haiti. He is a Christian and he asked me to pray for him. He says he wants me to pray that God will provide for him in finding a job. He doesn’t want people to feel sorry for him or be given hand outs for the rest of his life. He wants to find a job so he can provide for himself.
*Just this week another 3- patients left there are now around 50, half of whom are amputees and all have their prothesis. I am the only physio there for this week and next so things are a bit busy, its great though. The 3 patients who are double leg amputees all are walking around with their prothesis and crutches*

We have another Joseph in Milot. A 17 year old guy who lost his whole family in the earthquake, mum, dad and 4 siblings. He had a broken knee which has healed and a fractured elbow which was operated on and he now has infection. Right now he doesn’t live at the hospital but it supposed to come everyday for his antibiotics however he doesn’t want to come. I went to talk to him about coming to Milot and taking his medicine . He told me he didn’t care if he came because he didn’t care if he lived or died. He has no family left and doesn’t know what he is going to do. I spoke to him for ages and shared the gospel and had the privilege of praying with him and leading him to the Lord.
*Please pray for Joseaph I really felt he was convicted the day I talked with him and prayed, however no one has seen him since or knows where he is, please pray that God will protect him and bring him back to milot* 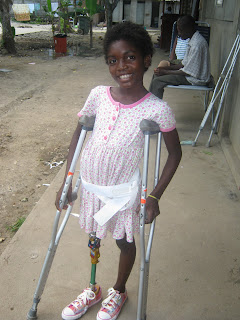 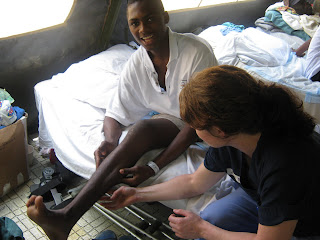 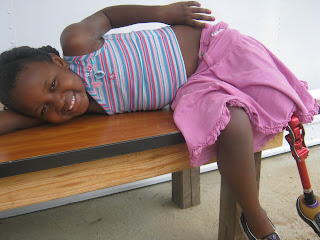 Radio distribution in Balan
At the beginning of June there was a team here from the USA who were involved in giving out solar powered radio’s and I got the opportunity to go along and translate. Radio 4VEH has been in Haiti for 60 years and through the ministry of solar powered radios thousands of people have to come know the Lord. We went out into the local community in teams of five. Each team consisted of three people from the US one person from the local church and a translator. Each house we stopped at someone shared the gospel and then gave the family in the house a radio. We had the opportunity to pray with believers, to encourage them and over 20 people accepted the Lord that day. The radio is on air 24 hours a day and for some people this is the only time they will ever hear the gospel. For some others 4VEH is their church and where they listen to sermons and bible studies. 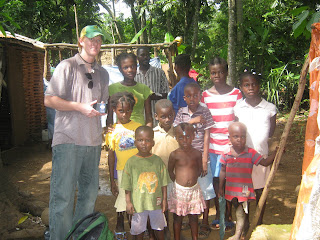 The new building in finally finished and being used! It looks great inside and we are using it for the AIDS clinic and also the TB clinic.

Just this week a portable Xray machine for the clinic. Hannah is pretty excited! Now we are just waiting on all the other things she needs to arrive so we can actually get X ray’s up and running!!There is a lady coming in on 15th July to bring the other supplies and to show Hannah how this particular machine works.
*so it is past 15th June and our X ray machine is up and running!After 2 and a half years of no Xray. Things have been picking up as word gets out that Bethesda has a machine. X rays are difficult to find here in the north of the country and also in The clinic ours in half he price of the other clinic which is close by which is much better for patients. *

Our ultrasound machine is still not really being used, please keep praying for someone to come for a short period of time to do some teaching.

The ‘Physiotherapy Department’ has been busy. I have been treating a lot of strokes and thankfully they have all been getting better. About 4 of my patients the first time they came they were completely paralysed down one side and now all of them are walking.

I also had another wee patient, Stephanie who was in port at school during the earthquake. The first time I saw her someone carried her in. She has damage in some nerves in her legs and I wasn’t overly sure what to do with her. However now just 6 weeks later she is walking completely by herself. 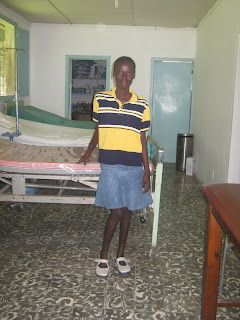 Just this week we had a very sick wee baby in, he has been sick for 5 days with diarrhea , he came back everyday to be given a strong antibiotic for 3 day. Ms Ketlie was looking after the family and spoke to the father who told her the baby was sick because of voodoo, someone had cast a spell on him. Ms Ketlie explained it was not that but just an infection she also shared the gospel and the baby’s mum became a Christian. The father wants to but says he is not ready yet. *Since then the dad has accepted Christ and the couple are planning to get married and begin a new life with God* 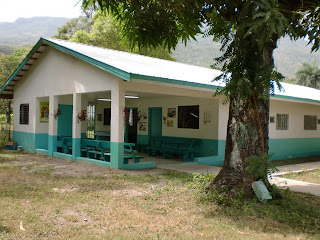 Mobile medical clinics
We have run mobile clinics in two different places, Soufrierre and Roque. The aim of a mobile clinic is not only to provide medical care but also to reach people with the gospel and encourage other believers.

Our team to Soufrierre included Dr Phil who was here on short term from N.I, Ms Prudence and 5 of our seminary students. We saw 200 patients in one day! The students had the privilege of leading some people to the Lord. The also prayed and counseled other patients. The earthquake really has affected everyone all over the country. Soufrierre is in the middle of the mountains about an hour away from Cap Haitian yet we found people living there who has been in Port on 12th January. Four of our students were also in port on 12th Jan and were able to pray and counsel those patients.


Roque is a very special place where OMS has been doing mobile clinics when Dr Gavin was here. However it has been nearly 2 years since they have had a doctor there. From Friday afternoon to Saturday evening we saw 320 patients!!I really do not know how the people in Roque survive, they are literally in the middle of no where and they have nothing yet they have content people because a lot of them have the Lord. The impact being in Roque has had on our team in amazing to see. Wadner was in Roque with us in 2008 translating , he came back this time to pray with the patients. After church on Sunday he was upset and I went over to see what was wrong. This is what he told me ‘Julie when people from the states come to Haiti they say they take everything they have for granted, that is how I feel about people in Cap Haitian. I just feel so blessed to be able to come here.’

The walk up to Roque

Praises
For both the medical clinics, the patients who were seen and those who committed their lives to the Lord.


For the new building being finished and being used.

For God’s faithfulness and how he is providing in every situation.

The portable X ray machine arriving. *and now being used!*

Patients leaving Milot hospital and returning to Port au Prince to live in a tent.

For a mobile clinic we are running for a week in Diquini, Port au Prince. *the clinic was cancelled due to unsafe conditions in Port, please continue to pray for the situation in Port*

For the country of Haiti, its government as they continue to rebuild
at July 29, 2010