I have had a good few patients recently who are a lot worse than they should be because of the system or lack thereof.   One young guy, just 30 years old came for Physio last week, 2 years ago he had some pain in his back which traveled down his leg and got so bad he couldn't walk.  He went to loads of doctors who all no idea what was wrong but just gave him painkillers.  As a result he stayed in bed for at least a year until the pain improved.  As the pain improved he began to start standing and walking again except now he cannot move his hip, knee or ankle to their full range of movement. It sounds like he had a disc protrusion (you have probably heard this described as a slipped disc) which with a few months of physio probably would have gotten better.  Now his leg will probably always have problems because he didn't move for a year!But he wasn't given any advice on what else to do and the belief in this culture is stay in bed until you get better. 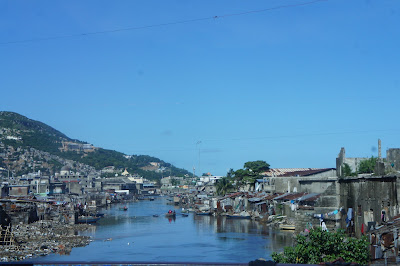 Yesterday I visited friends in Milot hospital.  Milot is a private hospital and has the reputation for being the best hospital here in the North, and it is.  My friend was in a motorbike accident 3 weeks ago, he was driving round a bend close to where we live when a big truck came flying round the corner, in the middle of the road, hit him and another motorbike (which had 4 people on it).  Alix broke his leg, arm and hand. He had to get a metal plate put in his leg and in his arm.  When you are in hospital in Haiti you have to pay for everything including the bed you lie on. Every time you need medicine you go to the pharmacy to buy it.  Your family have to basically stay with you to do everything, to get you washed and dressed, to take you to the toilet and to bring you something to eat and drink everyday.  Alex's wife, Astrid has been staying with him to look after him.  Last Sunday night she was outside the hospital getting something for Alex when she slipped in the rain and broke her leg.  Now they are both in the hospital and she is still trying to look after him. 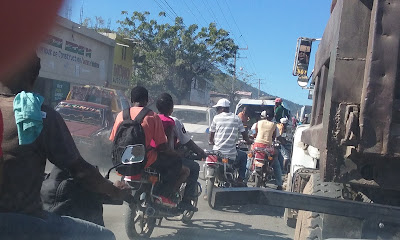 When I went to see them my physio brain kicked in, what did the doctor say? Are you allowed to put your foot on the ground? Do you have crutches? Have you had any physiotherapy? The answer was this ' The surgeon came after the operation and told me to try what I could. To try to walk if I felt like I could it and he hasn't been back since.  We don't have enough money to buy crutches yet so I have just been getting people to help me.  There has been no physiotherapist come to see me.  They said I am ready to home but we can't go until we have paid the bill.'

Then I asked about the driver of the truck, surely he should be responsible for some of the bill as the accident was his fault? After he hit the motorbikes he drove away, however they have found him but he denies hitting any motorbikes and also said if they pursue him again or go to the police he will go to a witch doctor and put a curse on them. This is a huge problem in Haiti with so many people practising voodoo. 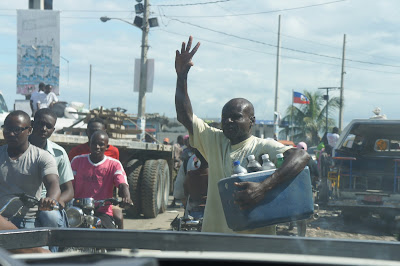 No one explained to Alex that if he lies in bed for the next few months until he feels the pain is gone that his hip, knee and ankle will become very stiff, that if he doesn't weight bear the bone won't heal properly and his other leg will become weak from not using it. So I got Alex started on a few bed exercises and hopefully once he gets home I can go every week to get him moving and strengthened up. 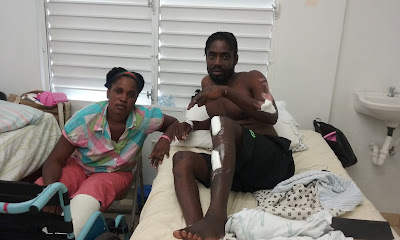 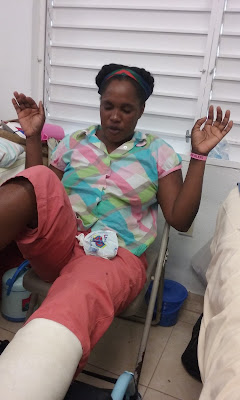 And as for the bill, it gets bigger everyday the longer they are there, the operation is the biggest part and they simply don't have the money for it.  There is no NHS and no insurance so they will have to stay  in the hospital grounds until they find the money to pay for it. Yesterday they were in the ward in a bed but now the hospital needs the bed so they are sleeping outside tonight until they can pay.


I am not sure how to finish this post off, pray for Alex and Astrid, pray that the Lord will provide what they need to get home.  Pray that they will both heal well over the next few months and pray for their kids ( aged 4, 6 and 10) who haven't seen them for 3 weeks as children aren't allowed to visit in the hospital.


Being in the hospital yesterday has really shown me how much physio is needed here, how much good healthcare is needed and how we need to work hard in Bethesda to provide the best care that we possibly can. 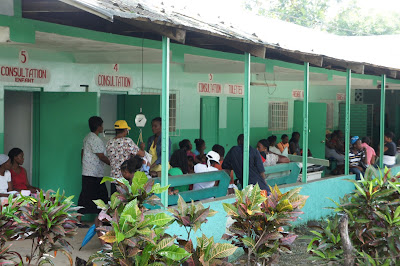